KRIS COMMONS insists Steven Gerrard’s team should NOT be labelled the Invincibles – even if they remain unbeaten in the league this season.

The former Celtic and Scotland international midfielder believes they cannot be mentioned in the same context as Brendan Rodgers’ 2016/17 line-up that were undefeated as they swept to a glorious clean sweep in the Irishman’s first season at Parkhead.

Gerrard watched in anguish as St Johnstone eliminated the favourites from the Scottish Cup 4-2 on penalty-kicks following a 1-1 extra-time stalemate at Ibrox last night.

And it was a similar story in Paisley in December as St Mirren knocked them out of the Betfred League Cup with a battling 3-2 victory. 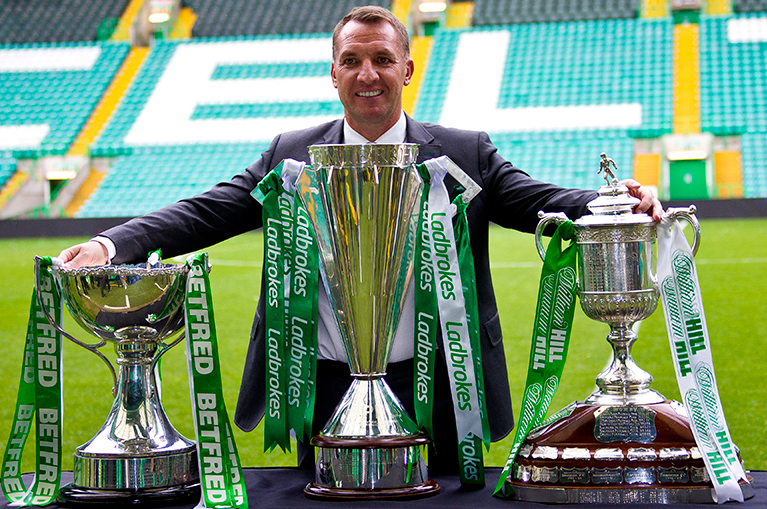 Gerrard has now won one piece of silverware – the Premiership when they halted the Hoops’ bid for a historic 10 in a row – out of the nine domestic trophies that have been up for grabs in his three years in charge.

Commons said: “An unbeaten league campaign is very much within their grasp. In the domestic Cups, however, it has been a completely different story.

“They were dumped out of the Betfred Cup against St Mirren and have now been knocked out of the Scottish Cup by St Johnstone.

“For me, these results should shatter any possibility of this Rangers team being referred to as ‘Invincibles’ in years to come.

“Even if they do go on to finish the league season unbeaten, I don’t see how you can mention them in the same breath as Brendan Rodgers’ Celtic team of 2016/17.

“They were true Invincibles who won every single domestic trophy available to them without losing a game.

THE CUP THAT CHEERS…Ronny Deila with the 2015/16 Premiership trophy.

“By definition, something which is invincible is too powerful to be overcome, it simply cannot be defeated.

“You could say that about Rodgers’ Celtic team; you can’t say it about Gerrard’s Rangers.

“The Ibrox side went into both of those matches against St Johnstone and St Mirren knowing that Celtic were already out of the equation.

“The trophy was theirs for the taking, or so it seemed.

“But they have now fluffed their lines once again – and it raises fresh questions over the mentality of this team.”

Commons added: “Make no mistake, the defeat to St Johnstone will have hurt Gerrard.

“He knows that it will raise fresh scrutiny around himself and his players. Success in the league does not make Rangers immune to criticism.

“Gerrard has won one trophy in the space of three seasons. It’s not a particularly great return.

“For goodness’ sake, even Ronny Deila managed to win a double. In fact, it would have been a treble had it not been for a horrendous handball decision against Inverness in the Scottish Cup.

“Clearly, Rangers and Gerrard are not the finished article. It’s chinks in the armour like this which should offer Celtic hope heading into next season.”

John Kennedy will take his players to Ibrox for the midday kick-off on Sunday with both clubs left with just two Premiership games after that clash.