ANGE POSTECOGLOU has admitted his delight at signing Japanese striker Kyogo Furuhashi on a four-year contract.

The deal for the 26-year-old international of J1-League outfit Vissel Kobe is still to be ratified due to the usual conditions and international clearance, but the Parkhead club do not envisage any problems.

A fee has yet to be announced for the hitman who has scored 14 goals in 20 games in the league season and had become a priority signing for the new boss who is aware of his finishing skills following his time in charge of Yokahama F Marinos, as CQN reported earlier today. 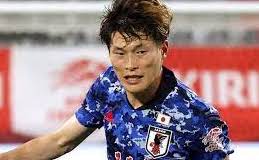 ACTION MAN…prolific scorer Kyogo Furuhashi will be a hit at Celtic, according to Ange Postecoglou.

Postecoglou, speaking to the club website, said: “We are delighted to bring Kyogo Furuhashi to Celtic. He is a player of real quality and clearly someone I know well.

“I think he will add something special to our squad and I am sure the way he plays will excite our supporters. We look forward to welcoming him to Celtic.”

Furuhashi has helped Vissel Kobe win the only two trophies in the club’s history so far – the Emperor’s Cup, when they beat Kashima Antlers 2-0 in the final on New Year’s Day 2020, and the subsequent Japanese Super Cup

That match against Postecoglou’s former club saw the forward score in the 3-3 draw, with Vissel Kobe winning the penalty shoot-out.

Furuhashi made his international debut against Venezuela in November 2019 and has scored three goals in six appearances for his country.

He is currently rated at £1.8million, according to the transfermarket site.