CELTIC will kick off their attempt for a fifth successive Betfred League Cup in October.

The holders have beaten Aberdeen (3-0), Motherwell (2-0), Aberdeen (1-0) and Steven Gerrard’s Ibrox side (1-0) in the past four years of domestic domination.

Christopher Jullien was last season’s hero with the solitary goal at Hampden on December 8 which brought the Hoops their tenth piece of silverware on the trot.

The competition will comprise a group stage and five rounds in total. There had been speculation the tourney would involve fewer games and could be scrapped completely due to the coronavirus pandemic.

But the group stage will get underway with five section matches – the first due on Tuesday, October 6 – and will be followed by four knock-out rounds.

The Cup Final is due at the national stadium on Sunday, February 28, 2021.

The SPFL revealed that all 42 of their affialiated clubs have confirmed that they will take compete.

They will also be liaising with the Highland and Lowland Leagues about the possibility of their champions, Brora Rangers and Kelty Hearts, also participating.

The group stage will follow the same format as last year, with matches ending in a draw after 90 minutes going straight to a penalty shoot-out, with the winners earning an extra ‘bonus point’ in addition to the normal point given for a draw.

The eight group winners and four best runners-up will then progress to the last 16 knock-out round.

SPFL chief executive Neil Doncaster, speaking in a report in the Daily Record, said: “Last season’s Betfred Cup was a hugely successful competition and we are looking forward to the same combination of excitement and passion this season.

“The process of scheduling the SPFL’s premier cup competition has been made much more difficult this year due to the disruption caused by Covid-19, but we are delighted to be in a position to confirm five uninterrupted rounds of fixtures once again.

“The innovations made to the competition in the last few seasons have proved to be a real winner with clubs and supporters alike. 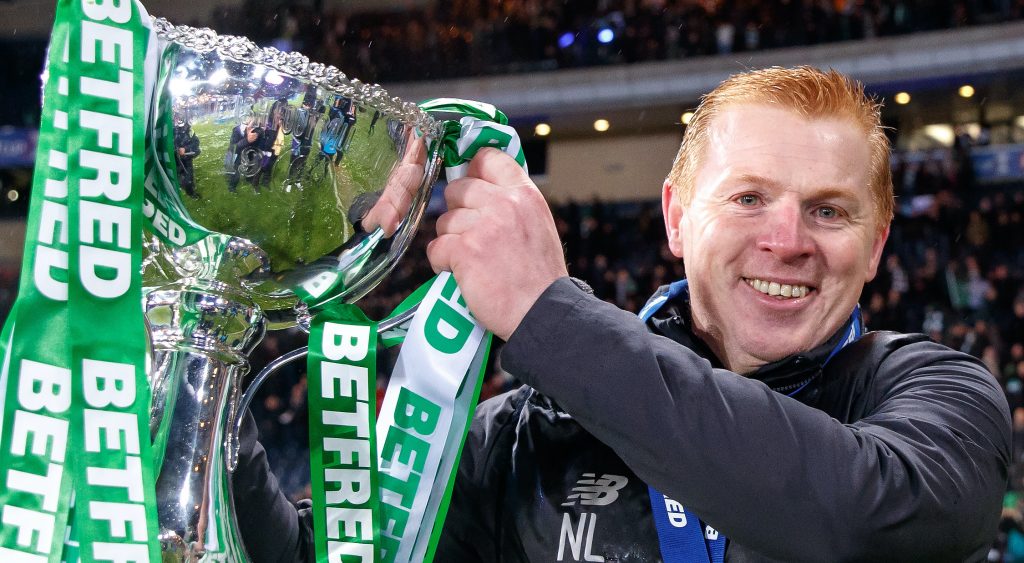 SILVER SERVICE…Neil Lennon is all smiles with the newly-won trophy.

“We are extremely grateful to our friends at Premier Sports, Betfred and the Scottish FA for their flexibility in agreeing this season’s Betfred Cup schedule.

“We wish all the clubs the best of luck in their quest to reach next year’s final.”

The draw for the first round group stage fixtures will take place in due course, with further details to follow.