Broadcasters Premier Sports will beam the action as it happens with the programme starting at 2pm – half-an-hour before the kick-off to the 2019/20 last-four confrontation that has been held over for seven months due to the coronavirus pandemic lockdown.

Neil Lennon’s men face the Pittodrie outfit as they edge towards the phenomenal quadruple treble after winning ELEVEN successive domestic honours on their glory trail while shattering all records.

The Hoops have won the national competition in the past three years, the spectacular sequence being launched in 2017 with a 2-1 win over the Dons when Tom Rogic scored his memorable last-gasp solo goal. 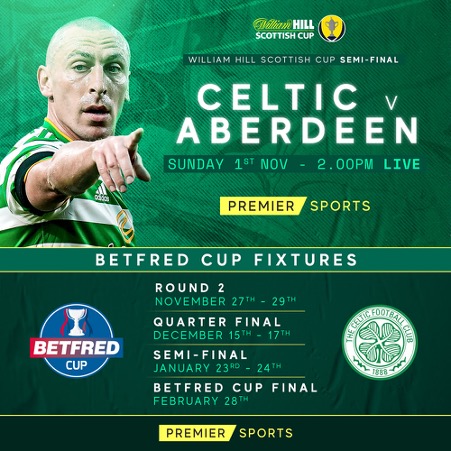 They followed that up with a 2-0 triumph over Motherwell with Callum McGregor and Olivier Ntcham on target and the treble treble was completed when Odsonne Edouard claimed a double in the 2-1 victory over Hearts on May 25 2019.

Coincidentally, the Parkhead outfit could square up to the Tynecastle side again in the Final with the date December 20 pencilled in for the showdown – if both clubs are successful in the semis.

The Edinburgh men, who were relegated to the Championship at the end of last season’s curtailed campaign. take on city rivals Hibs in their crucial tie at Hampden 24 hours earlier.