The French striker was given a rest in Sunday’s 3-1 victory over Hearts with Vakoun Issouf Bayo making his first start for the club and heavily involved in two of the goals.

The Ivorian powerhouse, though, makes way for Edouard and moves onto the substitutes’ bench alongside fellow-frontman Leigh Griffiths, who made a brief appearance against Craig Levein’s side.

Craig Gordon, who kept a clean sheet in the first game, was dropped for the comeback of loan keeper Fraser Forster against the Tynecastle outfit, but is in tonight with the Englishman unavailable. 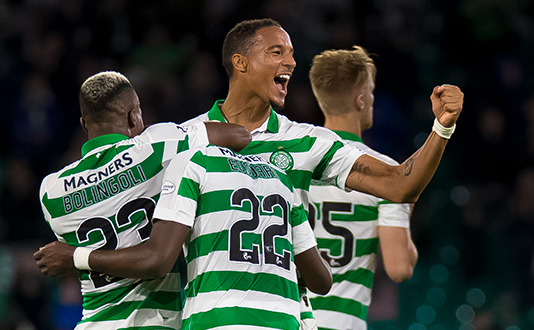 Kristoffer Ajer remains in the right-sided defensive position where he has shone in recent outings.

Nir Bitton will partner £7million man Christopher Jullien in the heart of the rearguard with Boli Bolingoli on the left.

Skipper Scott Brown will line up alongside Callum McGregor in the mid-two with James Forrest and Mikey Johnston wide with Ryan Christie supporting Edouard.