CELTIC return to Pittodrie for an intriguing High Noon Premiership showdown with Aberdeen this afternoon.

The Hoops have turned the north east into a happy hunting ground in recent times and have won on their last seven visits.

Last season, Neil Lennon led the team to their eighth successive title with a 3-0 victory over the Dons with Mikael Lustig, Jozo Simunovic and Odsonne Edouard on the scoresheet.

The French talisman got the ball rolling in the Hoops’ visit in October as they overwhelmed Derek McInnes’ side with a storming 4-0 first-half performance. Jeremie Frimpong scored his first goal since emerging as first-choice right-back. Mohamed Elyounoussi and James Forrest claimed the others in a lop-sided encounter. 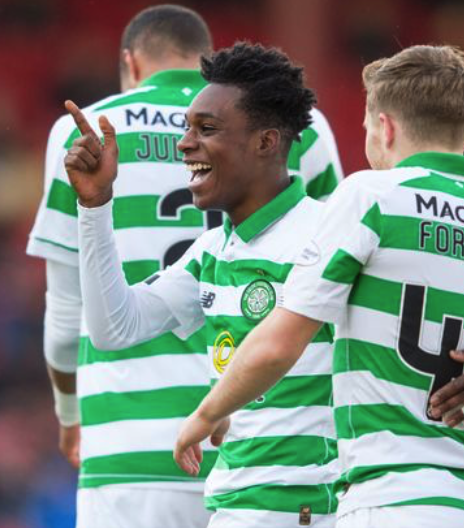 NUMBER ONE…Jeremie Frimpong looks delighted after scoring his first goal for the Hoops at Pittodrie in October.

The 19-year-old Dutchman has missed the past six games after being stretchered off in the 3-1 win at Kilmarnock last month following a hefty challenge from Alan Power late in the confrontation.

Frimpong is standing by to return after making a comeback to full training during the week, but Lennon is likely to keep faith with the 3-5-2 set-up that blitzed Hearts 5-0 at Parkhead in midweek.

Nir Bitton has also been named in the provisional squad following his hamstring injury against Partick Thistle last month, but the game will come too soon for his Israeli team-mate Hatem Abd Elhamed who is still recovering following a groin strain in the 2-1 win over Lazio in Rome in November.