NEW Bhoys Joe Hart and Kyogo Furuhashi make their first starts for Celtic against Jablonec in the Europa League third qualifying round tie in the Czech Republic this afternoon.

The former England international goalkeeper, signed for £1million from Spurs this week, and the Japanese striker, a £4.6million arrival from the J-League, go straight into Ange Postecolou’s line-up for the first leg encounter. 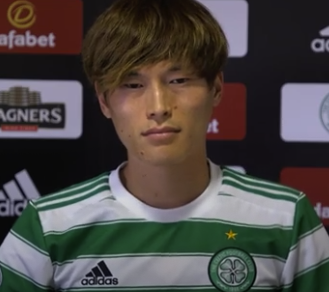 EUR IN…Kyogo Furuhashi will make his first start in the Czech Republic.

Huruhashi, who played 11 minutes of the 2-1 loss against Hearts at Tynecastle on Saturday night, takes over from Odsonne Edouard who is still looking for his first competitive goal of the season after firing three consecutive blanks.

Hart is chosen ahead of Scott Bain who drops to the substitutes’ bench alongside Vasilis Barkas.

Nir Bitton keeps his place in the middle of the defence with Stephen Welsh among the stand-by squad.