Celtic Quick News on News Now
You are at:Home»Latest News»CONFIRMED: KYOGO OUT, MAEDA IN
By CQN Magazine on 20th July 2022 Latest News

TOP scorer Kyogo Furuhashi is out the Celtic starting line-up against Legia Warsaw in the Artur Boruc testimonial match in Poland tonight.

The Japanese hitman, who fired in 20 goals last season despite missing 22 games through injury, is on the bench with his countryman Daizen Maeda leading the attack. 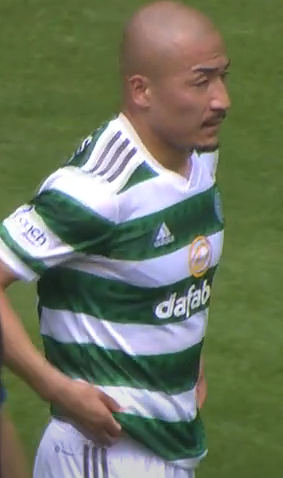 FINAL WHISTLE…Daizen Maeda at the end of the 3-3 draw with Blackburn Rovers on Saturday.

Liel Abada and James Forrest will be on the flanks while £3.75million Argentinian left-back Alexandro Berbanbei is also in for the kick-off after his substitute appearance in the 2-2 draw with Blackburn Rovers at the weekend.

Ange Postecoglou’s title winners return to Parkhead on Saturday for their final work-out against Norwich City before the Premiership kicks off against Aberdeen on Flag Day a week on Sunday.