DAIZEN MAEDA, an overnight sensation with the Celtic fans after his debut goal against Hibs, is OUT of the derby encounter with Giovanni van Bronckhorst’s Ibrox side a week on Wednesday.

Ange Postecoglou’s worst fears were confirmed when the new Bhoy was called into the Japan World Cup squad for the ties against China on Thursday and Saudi Arabia four days later.

Maeda, who joined as part of the triple swoop on the J-League on Hogmanay along with Reo Hatate and Yosuke Ideguchi, will also miss Wednesday’s clash against Hearts at Tynecastle and the home match against Dundee United a week today. 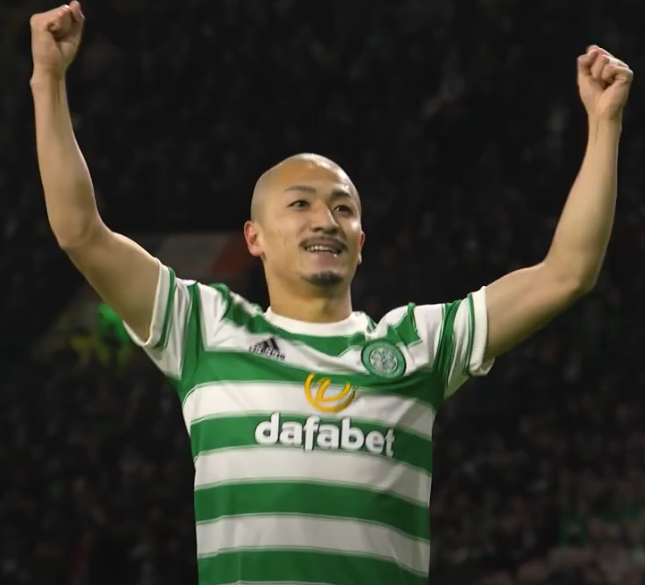 The good news for the Hoops boss, though, is that midfielder Hatate, who turned in a Man of the Match performance in the 2-0 win over the Easter Road outfit on Monday, WILL be available for all three Premiership confrontations.

Maeda joins Tom Rogic on the missing list with the Australian playmaker involved in his nation’s pool of players for their qualifiers against Vietnam and Oman on the same dates as Japan.

Kyogo Furuhashi has been overlooked by his country because of his hamstring problems and he is unlikley to be fit in time for the visit of the Govan club for the second Glasgow derby of the campaign.

Speaking about the inclusion of Maeda, Japanese international head coach Hajime Moriyasu, in the Daily Record, said: “What I expect from him are goals. He scored shortly into his debut for Celtic and he was the league’s top scorer last season. That’s what I want from him.

“I think he earned this transfer because the manager knows his character and his quality. That’s a big advantage and is a big reason for why we called him up.

“A lot of the time right after a transfer, managers don’t know how to use their new players and integrate them into the side. In those cases, we might not call them up.

“But Ange Postecoglou knows how to use Daizen. it’s very important for the manager to understand the player.”