Celtic Quick News on News Now
You are at:Home»In Pictures»CELTIC DENIED STONEWALL SPOT-KICK IN EURO EXIT: WORDS AND IMAGES OF THE SEASON: FEBRUARY (Part Four)
By CQN Magazine on 9th April 2020 In Pictures

STUNNING new images emerged to prove Celtic were DENIED a penalty-kick in the 3-1 Europa loss to FC Copenhagen at Parkhead on February 27.

CQN‘s photographs clearly highlighted a moment of high controversy in the 49th minute with the game still goalless. With the utmost irony, Portuguese referee Artur Dias ruled out a strike from Callum McGregor that could have set the Hoops on the way to the last-16. Instead, the match official awarded a foul to the Danes for a challenge by Christopher Jullien on the keeper.

Pity the whistler wasn’t so vigilant or eagle-eyed at an incident seconds before the Frenchman’s clash with the Danish club’s No.1.

The showstopper has his left arm around the neck of the Frenchman while the ball is in motion. Unfortunately, neither the ref nor VAR spotted the obvious infringement which would have undoubtedly resulted in the award of a spot-kick and a possible red card for Johnsson.

Instead, it was Neil Lennon’s men who were punished with McGregor’s ‘goal’ being chalked off.

Edouard got his revenge later on with a dinked penalty-kick – awarded by VAR after a clear handball by Ragnar Sigurdsson – but, alas, a late collapse saw Celtic exit the competition.

HOLD ON…keeper Karl-Johan Johnsson grabs Odsonne Edouard by the neck in a moment of controversy. 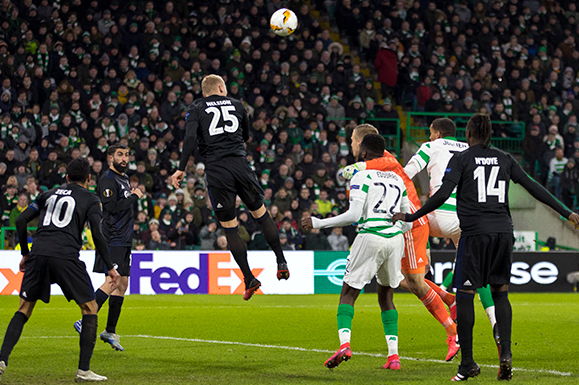 CLEARED…Victor Nelsson rises high to get his head to the ball with the keeper still paying close attention to the Hoops striker. 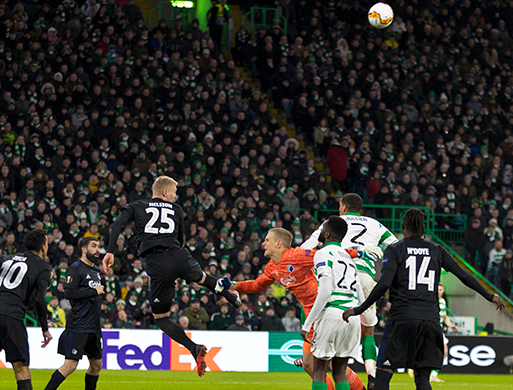 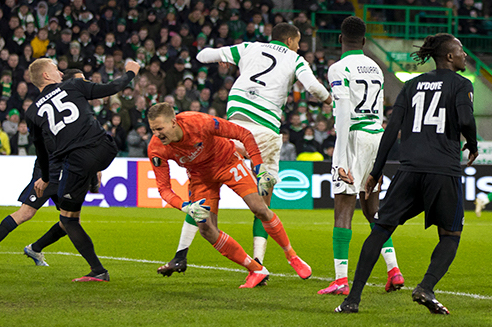 OUCH…Johnsson reels away after the bump with the Frenchman – and the ref is about to award the Danes a free-kick.