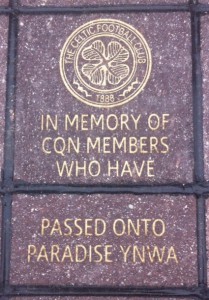 CQNers are a new type of community.  We mostly, though not always, share interests but we are anchored in commons values.  The achievements of the community are incredible.  We’ve made friends, some of whom are no longer with us and who shared their darkest hours on these pages, while others were lost in an instant.

Those lost friends now have a memorial stone outside Celtic Park, a credit to their memory.  Thanks to all who contributed.

You and I have been talking Moneyball for six years.  We’ve been convinced of the merits since then, most of the world is now, so it’s gratifying to know a manager would rather lose his job than succumb to the new orthodoxy.  Very brave of Mark Warburton, he has the makings of an ideal Newco manager.

Last week I wrote that I expected Newco to appoint Stuart McCall as permanent manager.  He was a reliable choice, had taken Motherwell to two consecutive second place SPL finishes, knew the task, had spent years scrapping around for free transfers and, let’s face it, is a ‘Real Rangers Man’.  I would not have looked past him.

Warburton managed Brentford for two years, winning promotion in the first and taking them to the play-off semi-finals in April, but Brentford is the story of owner, Matthew Benham, who has invested close to £50m in the club.  Warburton is fortunate to find two consecutive owners intent on spending £50m living the dream…….  you do have the money for him, Dave, don’t you?

“Our view is that from the outset, despite the claims from the then First Minister, Alex Salmond, that he ‘wished to build consensus’ the only support that the government has managed to attract for the Act is that of the Police Service of Scotland and the only consensus that is being built is that of the opposition to this dreadful, unworkable and pernicious legislation.

Their claim of public support for the Act is based on figures which show that people want action on sectarianism and not specifically that they support this Act.  They also conveniently ignore the fact that the overwhelming majority of sectarian offences (ie those with religious aggravation) do not take place in football grounds [http://www.gov.scot/resource/0042/00424865.pdf].  In addition, many of the incidents for which people have been charged under the Act are unrelated to sectarianism.

•             The action of the Scottish Government in giving off-the-record press briefings alleging that the Act will stay in place. This undermines the integrity of the Review process and the role of Parliament and its members.

•             The use of the statistics from a highly skewed YouGov poll commissioned by the government to mislead the public.

•             The continued reference by the Government to the Stirling research as being the ‘Review’ which the legislation requires them to have is an attempt to prevent the full and transparent examination of the Act which the public in general, and football fans in particular, expect and are entitled to.  These claims are made despite a statement issued by the University of Stirling on Friday (12/6/15) afternoon that the work produced by their team is not ‘the review’ and their work cannot be interpreted as ‘an endorsement of the Act’.

•             The scale of the resource devoted to enforcing this Act (including a specialised unit of the police service) which necessarily diverts finances and manpower from the detection and prosecution of more serious offenders.

•             To continue to oppose this legislation by all peaceful means until it is repealed.

We call on the Government to listen to football fans; to listen to those whose lives have been drastically affected by a piece of legislation which is a stain on the justice system of Scotland.”

We have the most right-wing left-wing government in history.