CELTIC teenager Lee O’Connor admitted it was “a dream come true” when he celebrated his Republic of Ireland debut in the 3-1 friendly win over New Zealand at the Aviva Stadium last night.

Irish boss Mick McCarthy, the former Hoops centre-half, handed the 19-year-old right-back his big chance – even before the player had made a first-team appearance.

O’Connor joined the eight-in-a-row champions from Manchester United on transfer deadline day and is still waiting to make his bow in the top side.

McCarthy, though, had no hesitation in bringing him to face the Kiwis and the teenager rewarded the gaffer with an assured performance in which he also set up the nation’s third goal for Callum Robinson.

The former Old Trafford academy prospect, who is equally at home in central defence, has had a whirlwind few months.

O’Connor, speaking to RTE Sport, said: “It was a great moment for me and my family and friends. It’s something you work for your whole life. To get it at 19 years of age is a dream come true – it doesn’t get much better. 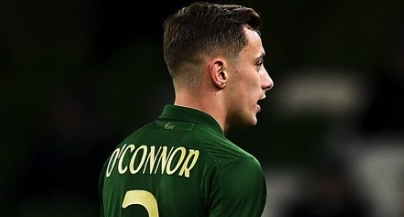 “I felt fine. At the start, you have a couple of butterflies, but once the whistle blows you just have to get on with it.”

O’Connor will now sets his sights on Tuesday’s Euro Under-21s qualifier against Sweden in Tallaght.

He said: “We’re a very together group in the Under-21s. I’m enjoying it. You kind of have to stop for a minute and take it all in. It’s been a crazy few months, but very enjoyable.”

O’Connor linked up well with the returning Robbie Brady on Ireland’s right. He hopes he’ll get more opportunities to show what he can do in McCarthy’s team – as well as making the breakthrough at Parkhead.

He added: “Of course, there’s a big step-up, but I think I did well. I’m happy with my performance. Hopefully, it’s the first of many.

“The assist was a great moment for me. Robbie’s left footed. It kind of played into my hands, I could go around the outside. I thought we worked well together.

“That’s what I want to do now, push for the first team at Celtic. Hopefully I can.”