Celtic Quick News on News Now
You are at:Home»Latest News»CUP FINAL: BROONY SPELLS IT OUT
By CQN Magazine on 6th December 2019 Latest News

SCOTT BROWN is in no doubt what Celtic MUST produce at Hampden on Sunday if he is to pick up his TENTH successive domestic honour.

The skipper scored the stoppage-time winner against Hamilton Accies in midweek as the champions notched up their 11th successive victory.

Now he is looking forward to the challenge against Steven Gerrard’s Ibrox outfit in the Betfred League Cup Final as the Hoops aim to continue their domination of Scottish football.

Reflecting on the hard-fought 2-1 win over Brian Rice’s gallant Accies, the 34-year-old midfielder, speaking to the Evening Times, admitted: “We need to make sure we play a lot better.

“Any result at home is always pleasing. We got the three points, it wasn’t pretty, but it’s still three points.

“Hampden has been good for us recently. We’ve had to work in all the games we’ve played there. The way we play suits us. Hampden is a big pitch and it’s usually good, so here’s hoping for the same performance.

“It’s always going to be hard, no matter who you are playing. We’ve gone there, done really well, we’ve struggled in some games where we’ve gone behind,, but we’ve always come back.

“We need to make sure we always have that belief whether it’s against Hamilton or whoever. We need to keep pressing and play a lot better than we did on Wednesday.”

The eight-in-a-row champions were on the brink of throwing away two points when they failed to build on Ryan Christie’s 13th-minute opener. Accies celebrated wildly when they equalised in the 90th minute and it looked as though time had beaten Neil Lennon’s men. 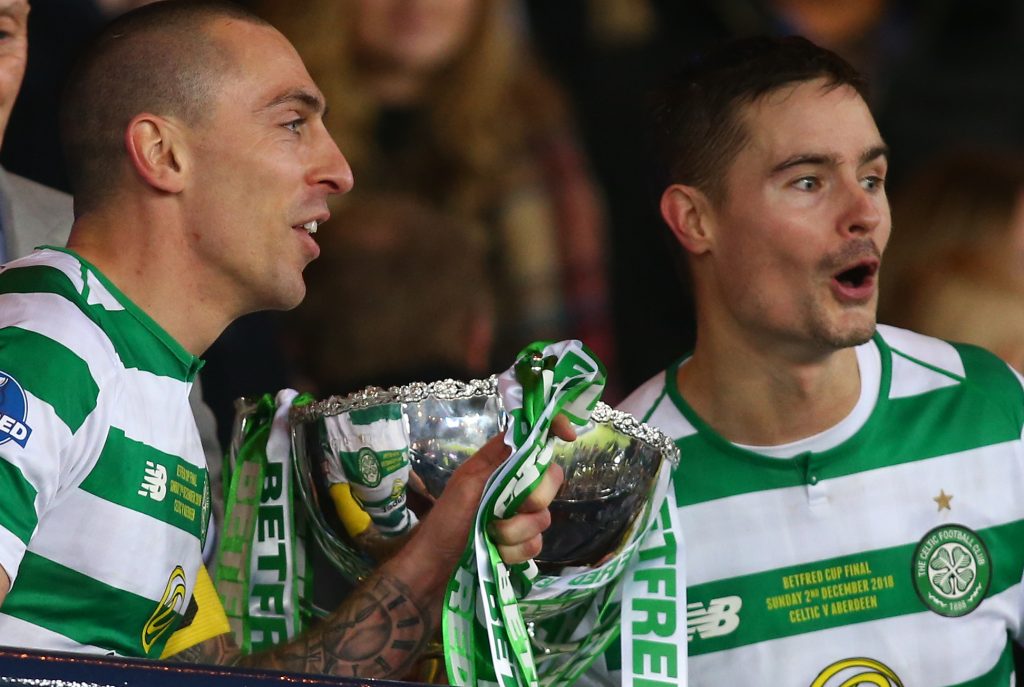 THE CUP THAT CHEERS…Scott Brown and Mikael Lustig with the League Cup after last season’s 1-0 win over Aberdeen.

Never-say-die captain Brown had other ideas, though, and managed to join the attack for one last thrust to angle in the winning goal two minutes into added-on time.

The former Scotland international captain is confident of more silverware success at the national stadium at the weekend – even if the talismanic Odsonne Edouard is ruled out.

The French Under-21 international frontman, who got the first goal in the club’s 2-0 triumph at Ibrox on September 1, has missed the last three games – Rennes (3-1), Ross County (4-1) and Hamilton – and is doubtful for the Glasgow derby.

Winger Lewis Morgan has been utilised as a makeshift striker in Edouard’s absence and the former St Mirren attacker has impressed his skipper.

Brown added: “You’ve seen wee Lewy doing unbelievable well over the last few weeks. He has pace and a willingness to run and close things down that maybe no-one else can do.

“It shows the strength in depth in the squad. You never know who is going to be fit and we’ll check that in the next couple of days.

“We are all very close in the dressing room and we all want each other to win and to play well. When lads are injured, they keep coming along, support the lads and in the changing room they speak to us before the game. That’s what a good squad does.

“It’s about making sure everyone is fit. Going into a Cup Final, there are a lot of places up for grabs. The manager has a hard decision to pick 11 players. It’s just about making sure the form is good in the next couple of days in training to make sure you are available.

“In a Cup Final, it’s about who turns up on the day and we need to make sure we’re ready and focused.”