Celtic Quick News on News Now
You are at:Home»Latest News»‘CUT OUT THE NONSENSE’: SUTTON’S MESSAGE TO GREEN BRIGADE
By CQN Magazine on 30th November 2019 Latest News

FORMER Celtic striker Chris Sutton admits the Green Brigade can be a positive presence during games at Parkhead.

However, the Englishman insists it is time they “cut out the nonsense” that led to a section of the ground being closed for the Europa League Group E encounter against Rennes on Thursday night.

Sutton was delighted with his old club’s 3-1 win over the French outfit that ensure a top-place finish in the section ahead of their last remaining game in Romania against Champions League conquerors Cluj a week on Thursday.

Then the Hoops can look forward to the knock-out stages of the competition when they go into the draw in Nyon on December 16 as a seeded team following their exploits in their group with four victories and a draw in the first five games.

Sutton, in his Daily Record column, said the triumph over Rennes was “almost run of the mill” and remarked: “But cruising against some top continental teams is worth crowing about for the Hoops support. Don’t ever get bored of winning in Europe. 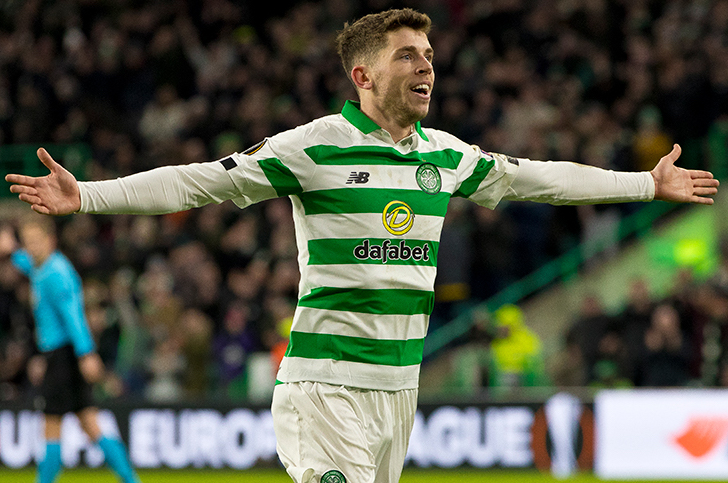 HAIL THE HERO…Ryan Christie celebrates his goal against Rennes.

“Celtic sent out a message they mean business in Europe. But let’s also hope the Green Brigade got the message as well after being forced to sit it out.

“Their absence undoubtedly had an impact on the atmosphere. They bring the noise to Celtic Park and most of the time are a positive presence.

“But they simply have to cut out the nonsense. If they want to make political protests then march on George Square.

“I don’t even care too much about that stuff – it’s the pyrotechnics that get me. They know UEFA don’t want them and, more importantly, they are fully aware the fireworks are dangerous.

“How would they feel if it’s their child who ends up losing an eye or getting their face badly burned? That’s what we are talking about here.

“I can’t get my head around why any fan would go out and behave in a certain way they know is going to damage their club, whether it’s with fines or with sections of a stadium ordered to be shut or closed entirely by UEFA. 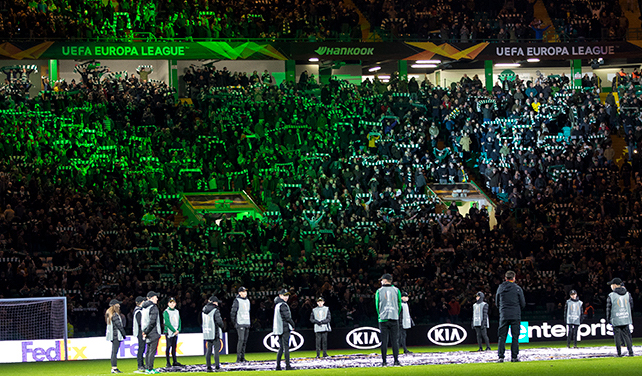 GREEN FOR GO…Celtic fans are bathed in an emerald spotlight on Thursday night.

“But it’s even more mind-boggling when it’s people being put in harm’s way. The Green Brigade were missed the other night, but it’s them who lost out because they didn’t get to witness as composed and competent performance as you are likely to see in Europe.”

Sutton, who was Martin O’Neill’s first signing for the club when he arrived in a £6million switch from Chelsea in the summer of 2000, added: “The slick display against Rennes just showed how far this side has come on the continent this season.

“It wasn’t so long ago there was a big backlash after exiting the Champions League to Cluj. Since that point, Neil Lennon and his side have barely put a foot wrong.

“Sure, Rennes were under-strength and had nothing to play for the other night. But they still had some big-money signings in their side while Celtic didn’t have a
recognised striker, were without their first-choice full-backs and in-form Mohamed Elyounoussi.

“Yet they made it look easy on Thursday night.

“Don’t forget, it wasn’t so long ago Celtic had to shut the top tier for Europa League games.

“The supporters should lap it up. I know a few of them might be allowing themselves to think about doing another Seville, but that would be getting carried away.

“There’s no doubt, though, Celtic are a force in Europe this season and they will fancy their chances against anyone who comes to Celtic Park.”