RYAN CHRISTIE scored his first Scotland goal in the Euro 2020 qualifier in Nicosia this afternoon.

Remarkably, it was also his nation’s first strike on their ill-fated travels in the section with defeats against Kazakhstan (3-0), Belgium (3-0) and Russia (4-0).

The elegant Celtic midfielder broke the barrier with a superb effort in the 13th minute after he picked up a short pass from John McGinn on the right.

He carried the ball forward with menace as he cut in and, as the Cypriots backed off, he curled a sublime left-foot effort from 20 yards past the despairing Urku Pardo into his top right-hand corner of the net.

Christie’s excellent breakthrough goal came just seven minutes after the home nation thought they had scored when a shot from Georgios Efrem beat David Marshall and thumped against the underside of the crossbar before ricocheting down and away. 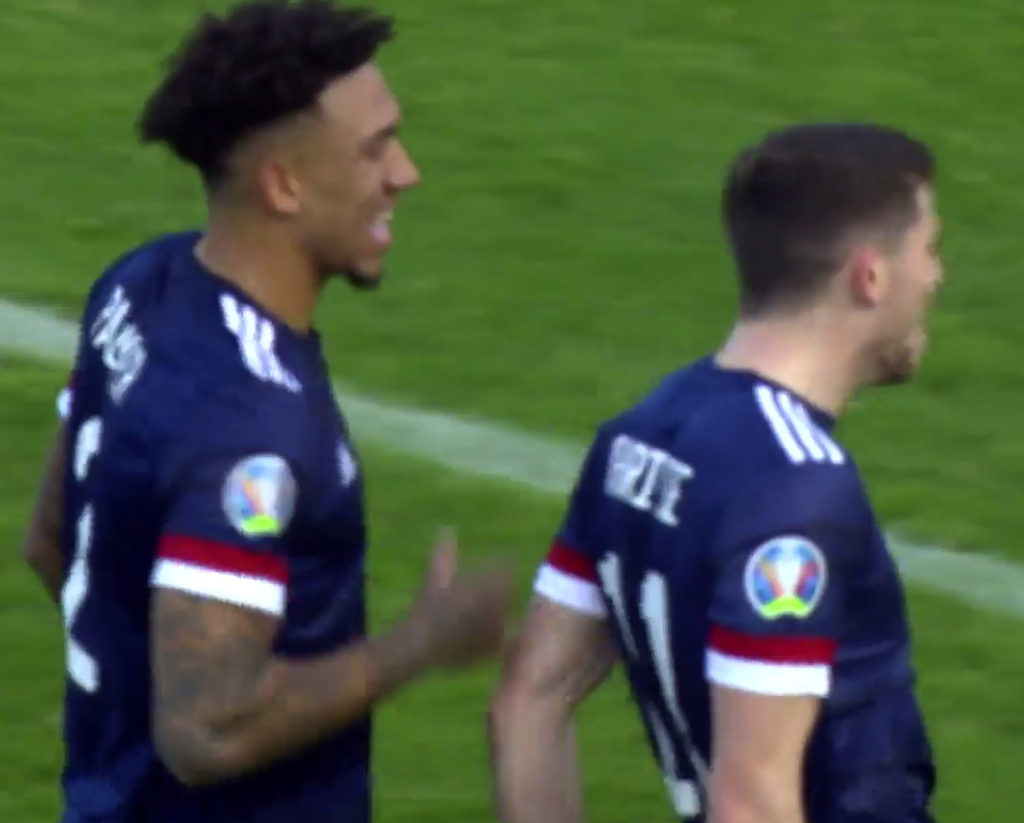 AWAY DAZE…Ryan Christie salutes the fans as Liam Palmer adds his congratulations following the opening goal.

TV pictures were inconclusive, but it looked extremely close and it was an escape for the Scots.

Austrian referee Harald Lechner was baffling friend and foe with his weird decisions and Callum McGregor was on the receiving end of a bizarre yellow card when he was penalised for kicking  the ball to an opponent who was waiting to take a left-wing corner-kick.

Scotland’s interval advantage was wiped out two minutes after the turnaround when Efrem got one that counted and no-one could argue this time.

Debutant Declan Gallagher did well to knock away a dangerous right-wing free-kick, but, unfortunately, the ball dropped straight to the Cyprus dangerman and his volley screamed high beyond the helpless David Marshall.

There was a Celtic connection when McGinn claimed what proved to be the winner in the 53rd minute.

James Forrest and Greg Taylor combined on the left before the full-back sent a cute pass into the danger zone.

The Aston Villa midfielder first-timed a left-foot drive away from the stranded Pardo from 12 yards.

Boss Steve Clarke put on Oli McBurnie and Oli Burke for the injured Steven Naismith and Forrest as he set up the team for breakaways as they hung on for three points.

Now he is hoping for two in a row when Kazakhstan visit Hampden on Tuesday night.