Celtic Quick News on News Now
You are at:Home»Latest News»DAILY RECORD’S PAEDO SLUR
By CQN Magazine on 20th January 2017 Latest News
THE fall-out from Wednesday’s Radio Scotland interview with Stewart Gilmour continues with Celtic manager Brendan Rodgers having his say and the journalist who wrote a back page story on Gilmour’s remarks being plunged into a job threatening personal crisis after shaming himself on social media.
Brendan Rodgers praised Celtic chief executive Peter Lawwell and insists all of Scottish football is benefiting from his leadership qualities.
The Hoops boss was responding to comments attributed to former St Mirren chairman Stewart Gilmour on a BBC radio programme.
The ex-Paisley supremo said Lawwell was responsible for the running of the game in Scotland and hinted he did not always act with the greater good of the game in mind.

However, Rodgers immediately backed the Parkhead chief and said: “He should be glad, eh? My experience of Peter is he’s a wonderful ambassador, not just for Celtic, but for Scottish football. I believe if Celtic do well everyone else does well.

“Celtic are a club that are not just representing ourselves but Scotland. And Peter, for me, in terms of the operation of Celtic, over how many years he’s ran it very well. That’s why the club is in such a stable position, such a good position.

“That leadership has given him a profile in Europe with other top presidents and directors. That’s through his behaviour and the quality of leadership in his work.
“I think he does a great job and he represents Scotland very well.”
Meanwhile the journalist who wrote the back page story in the Daily Record on Gilmour’s views on Peter Lawwell running the game in Scotland, has today been exposed on social media as a narrow minded, bigot, making a default hunnish remark on Twitter.
Alan Clark, the Daily Record journalist wrote “You’ve got paedo on your mind. You must’ve been dealing with a lot of time recently. I forgive you.”
On his ‘exclusive’ in the paper (he listened to Radio Scotland) he stated on Twitter that he was ‘Delighted to get my first back page splash in today’s Record.”
Clark has now protected his tweets but that may be seen as too little too late by his bosses who must recognise that slurs of this nature will see even more Celtic supporters walking away from their paper.
Unbelievably Celtic still partner with Trinity Mirror, the owners of the Daily Record, in publishing the Celtic View. 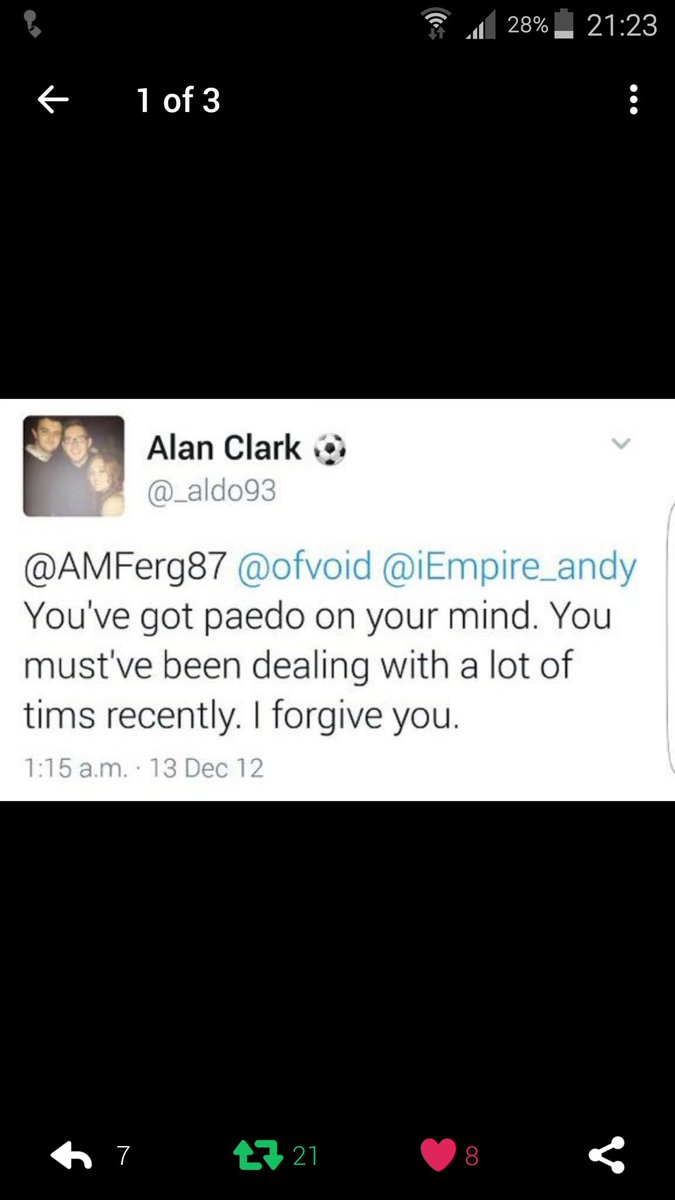 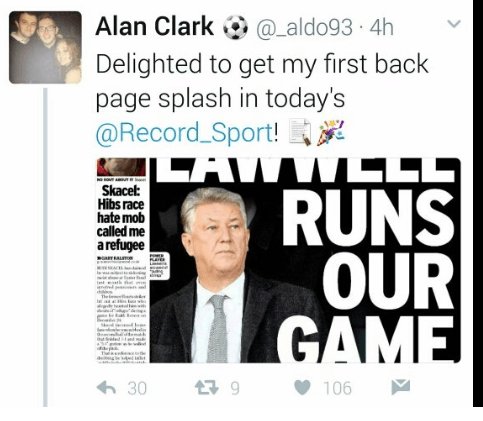