Celtic Quick News on News Now
You are at:Home»Latest News»DALY TAKES CHARGE OF HEARTS AGAINST HOOPS
By CQN Magazine on 2nd August 2017 Latest News
JON DALY will be in charge of Hearts for their Premiership opener against Celtic at Parkhead on Saturday.
The former Republic of Ireland and ex-Sevco Rangers striker has been given the responsibility as the club look for a long-term replacement for Ian Cathro who was sacked yesterday.
Daly, promoted on a temporary basis from Under-20 coach, will be assisted by Liam Fox and assistant Head Coach Austin MacPhee, who is being retained by the club despite Cathro’s departure.
The news the rookie boss had been given the boot was revealed in a statement released just after 9am yesterday. In it, Director of Football Craig Levein confirmed the coach was leaving “with immediate effect”.
Speculation about Cathro’s future had intensified after they toppled out of the Betfred League Cup following their dismal 2-2 draw with Dunfermline at Tynecastle on Saturday.
Managers already being linked with the vacant post include two ex-Celts in Paul Hartley and Steven Pressley, who also played for the Edinburgh outfit.
Other names in the frame are other former Jambos Gary Naymith and Allan Johnston while St Johnstone gaffer Tommy Wright and Partick Thistle’s Alan Archibald are also being tipped as candidates. 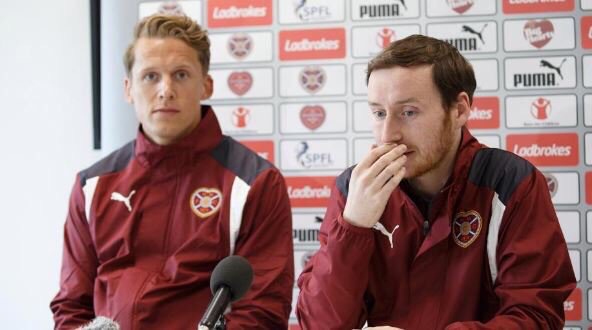 Cathro, who was appointed in December with the club second to Celtic in the Premiership, won only five of 22 league during his brief stint.
The sacked Hearts boss could be back in the game very quickly though as he is being lined up for a coaching role at Wolves.
Daly, the ex-Sevco Rangers journeyman, is sure to receive a very special welcome from the Celtic support on Saturday!