Writing in his weekly newspaper column Davie dismissed the criticism that has been aimed at the manager and the tactical choices made by Celtic on Tuesday night and instead lays the blame fair and squarely on the shoulders of the players who he reckoned lacked commitment to the cause.

“I don’t buy the criticism 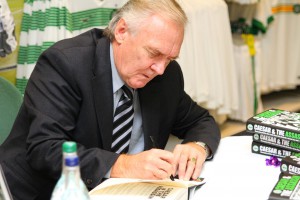 of the manager that is team selection was wrong or his tactics were wrong,”  stated Davie.
“It was a limp and inept Celtic performance that lacked desire and commitment and never more so in the second half of that 45 minutes in Malmo when Celtic never looked likely of getting back into the game.”

“The bottom line for me was that the Malmo players looked far more committed to their cause than the Celtic players did.

“And while I would never have been one to slaughter players in public, had I been in Deila’s shoes there is no question that I would have left many of them without a leg to stand on in the privacy of the Celtic dressing room.”

Hopefully Ronny reads Davie’s words of wisdom and makes sure that his Celtic team never again “lacks commitment” while being paid handsomely to wear our famous jerseys.

* We still have a limited number of SIGNED copies of Caesar & The Assassin. You can your signed copy direct from CQN – ORDER HERE.