DAVIE HAY has sent a message to Hoops fans as he prepares for yet another Celtic comeback.

The 72-year-old club legend is still making good progress as he recovers from a kidney transplant operation, as CQN reported earlier this month.

Hay was released from hospital just over three weeks ago and was swift to praise the staff of Glasgow’s Queen Elizabeth Hospital following the care and attention he was given throughout the process.

The former player and manager has been in touch with Celtic book author Alex Gordon, who co-wrote the Hoops great’s autobiography, The Quiet Assassin’, to relay an update on his condition.

Alex told CQN: “Davie was in high spirits when he made the phone call just before the Europa League game in Copenhagen. He is desperate to get back to supporting the team, but he realises he has to take it easy.

“My pal was joking that he has now had more comebacks than Frank Sinatra. He was sold as a player by Jock Stein after his spectacular performances for Scotland in the World Cup Finals in 1974, He returned as manager when Billy McNeill left in 1983. Then he made way when Billy made his own comeback four years later, but Tommy Burns brought him in as chief scout in 1994. 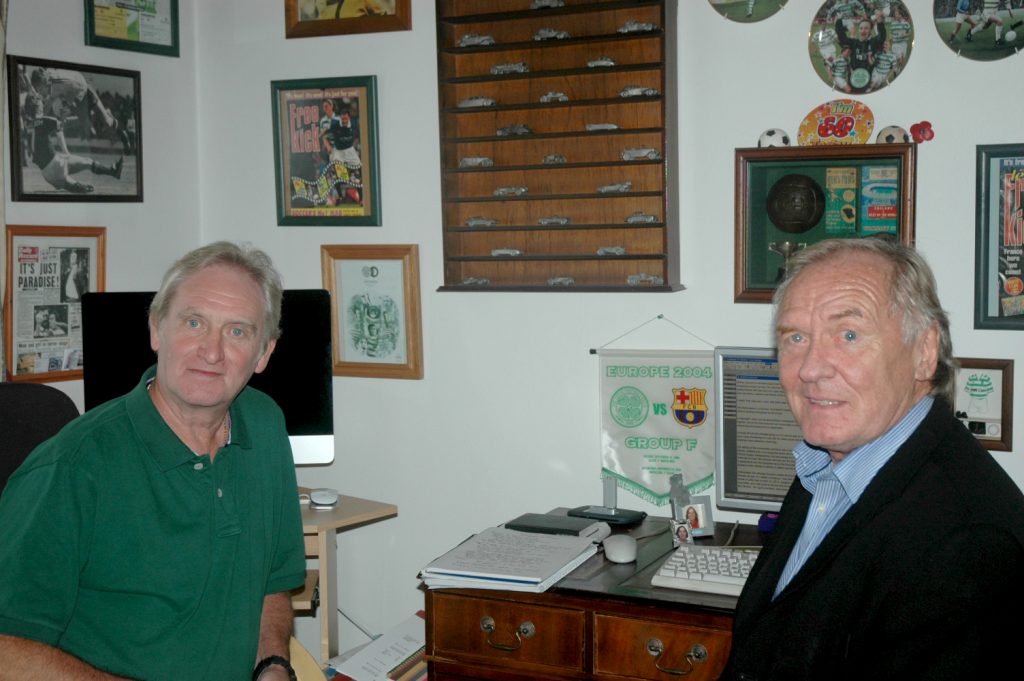 THE WRITE STUFF…Davie Hay and author Alex Gordon chat during an interview.

“Davie was assistant general manager during Wim Jansen’s title-winning 1997/98 season, but was sacked following some unfortunate internal politics. Throughout it all, Davie never lost his love of Celtic. Now, quite rightly, he is back in the fold as a club ambassador. I think it would be fair to say Davie Hay is unique in the history of Celtic Football Club.

“Now he tells me his aim is to get back to following the team and he has targeted Thursday’s second leg against FC Copenhagen.

“He wanted to be at Celtic Park this afternoon for the match against Kilmarnock, but that is a stretch too far even for such a determined and resolute character as Davie.

“So, all going well, he will be there with the rest of the support as Neil Lennon hopes to lead the side into the last 16 of the competition in four days’ time.”

Gordon added: “Davie has also asked me to thank all the fans who have sent their best wishes. He has been utterly overwhelmed. Apparently, he didn’t realise he was so popular!

“He’s remaining positive, as ever, and we all know you can’t keep a good man down.