CELTIC and Arsenal are deadlocked in the £25million Kieran Tierney transfer saga and at the moment the left-back will NOT be moving to the London club, as CQN reported yesterday.

We insisted there would be no deal if the Gunners did not submit a restructured offer for the 22-year-old Scotland international defender.

The Emirates outfit, with a summer spending budget of a mere £45million after last season’s failure to secure a Champions League place, have not been able to satisfy the eight-in-a-row title kings who have refused to budge since last month’s original derisory £15million submission that was immediately rejected by chief executive Peter Lawwell and his board.

The add-ons in the latest proposed move are believed to have included the guarantee of the club finishing in the top four in the Premier League to win a spot among the European elite a year from now. 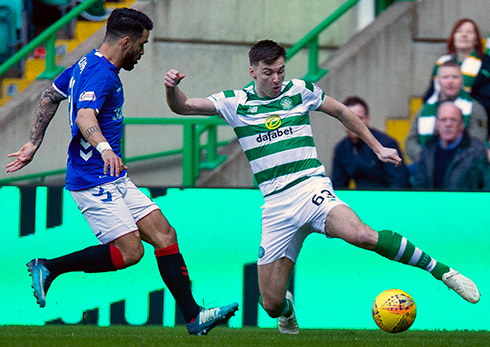 BY THE LEFT…Kieran Tierney takes on Daniel Candeias in the 2-1 win in March.

Some reports indicate Unai Emery’s club were only willing to guarantee an upfront cash outlay of £18million with the remainder paid when their ambitions were achieved.

The Hoops found some of Arsenal’s targets to be unrealistic and were, quite rightly, not prepared to allow one of Britain’s top young full-backs to leave for a bargain fee – especially after picking up £19.8million from Lyon a year ago for Moussa Dembele who has yet to represent France at senior international level.

CQN understands the English side are now searching for alternatives after the most recent stalemate.

The club’s Head of Football, Raul Sanllehi, has flown back to London from the US tour to get deals done, but talks with Celtic are not on his agenda.

Instead, he is likely to be concentrating on Crystal Palace’s flamboyant forward Wilfried Zaha after the beaten Europa League Finalists, thrashed 4-1 by Chelsea in May, were knocked back following their initial £40million enquiry.

For his part, Hoops fan Tierney, who is under contract until 2023, has not been making waves in the background and is concentrating fully on recovering from a pelvic problem after a double hernia operation in the summer.