Celtic Quick News on News Now
You are at:Home»Latest News»‘DEATH BY A THOUSAND CUTS’
By CQN Magazine on 20th December 2020 Latest News

NEIL LENNON has a massive decision to make over skipper Scott Brown as he plots his masterplan to overcome Hearts in this afternoon’s Scottish Cup Final at Hampden.

The Celtic manager has left out the 35-year-old onfield leader for the past two games and has witnessed youngsters David Turnbull and Ismaila Soro perform excellently in the 3-2 Europa League Group H victory over Lille and the 2-0 win over Kilmarnock to make sure of three much-needed Premiership points a week ago.

Lennon hinted he would like the players who got the Hoops to Hampden to feature today, but has now insisted there will be “no sentimentality” when he names his line-up for the occasion that affords Celtic the opportunity to make history once again by claiming the spectacular quadruple treble.

The Irishman laughed off suggestions Brown’s situation is similar to his own when he made his last appearance for the club in the 1-0 Scottish Cup Final triumph over Dunfermline in 2007 when he was substituted in the second-half by Gordon Strachan and a goal from on-loan Jean-Joel Perrier-Doumbe took the silverware to Parkhead, as CQN reported during the week. 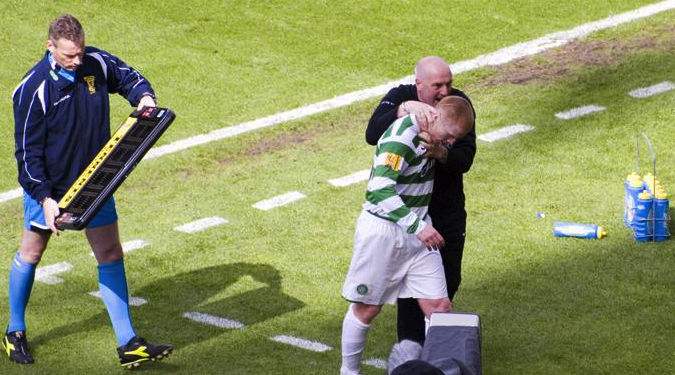 FINAL FLING…Neil Lennon is consoled by Celtic assistant Garry Pendrey as he leaves the Hampden field in 2007.

Lennon, speaking to the media, joked: “Don’t go there – it took me 13 years to get over that. It is a different situation.

“I probably made a mistake by saying around March that I was going to leave at the end of the season and then it was like death by a thousand cuts, it dragged on and on.

“In Scott’s case, he has got at least to the end of this season to play and maybe longer. It is not as if this is going to be Scott’s swansong if he plays.

“Hopefully, we can negotiate and try to maybe get to another Cup Final at the end of the season and he could – and maybe should – be involved in that, as well.

“I mean there’s a lot of talk of whether I start him or not or start this one or not, it will be my decision and we will make the right decision for the club.”