The Hoops striker believes Brendan Rodgers’ side blew a £40million Euro pay-day for not being able to keep a clean sheet.

Griffiths was hugely disappointed after watching the side control most of Tuesday’s qualifier in Athens – and crash out because of two soft goals.

The Scotland international frontman said: “AEK had two or three shots. We dominated going forward and on another night we’d have scored three or four.

“But it’s about defending. And if we can’t do that properly we don’t deserve to be in the Champions League.

“If we can’t defend simple crosses and do what we’ve done for the past two years, we don’t deserve to be there.

“It was two basic errors which meant we conceded two goals. If we defend properly we’d have been in the play-off.”

Amazingly, the Greek had only two efforts on goal in Athens and scored with both of them. Craig Gordon didn’t have to make a save.

In the first leg at Parkhead, they had two attempts – and scored one to go through on a 3-2 aggregate where they will now meet Hungary’s Vidi and should be favourites to reach the group stages of Europe’s premier tournament which will bring a £40million bonanza. 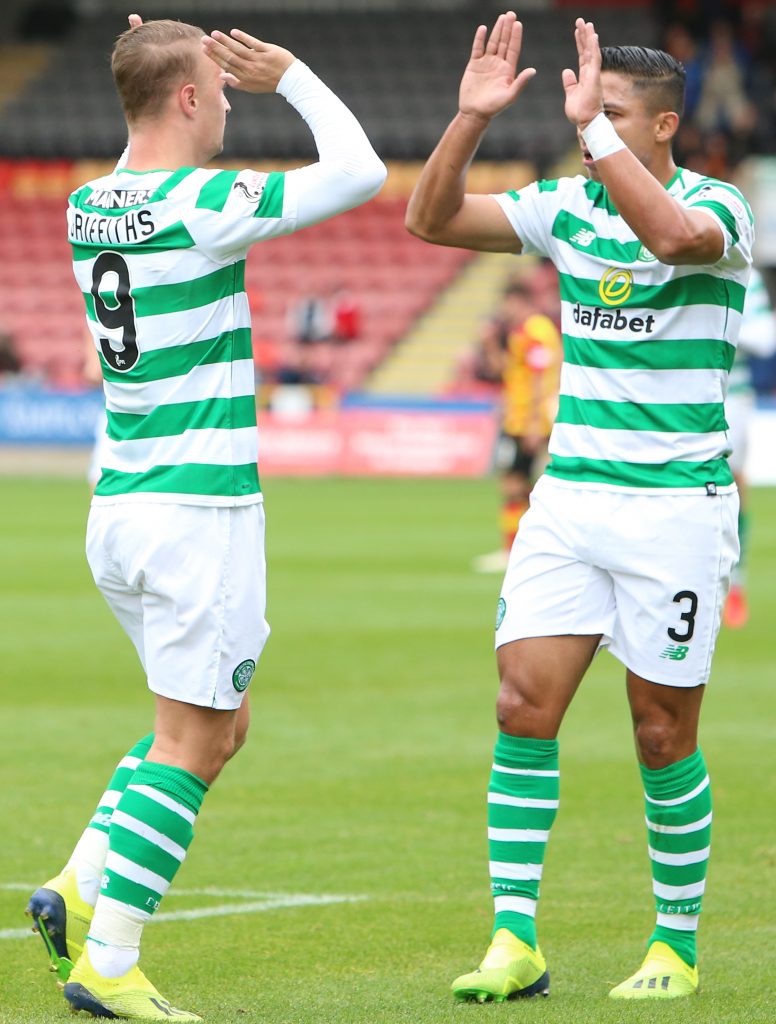 JOY BHOYS…Leigh Griffiths celebrates with Emilio Izaguirre after the opening goal – his 99th – against Thistle.

Griffiths, who will celebrate his 28th birthday tomorrow, has also been stung by the criticism the club received after their Euro exit and a league defeat to Hearts.

But he said: “The flak drives you on. If people want to doubt us, it’s fine.

“People have doubted us for two seasons in terms of how far we could go.

“We’ve proved everyone wrong. We’ve won everything domestically and we’re going for the clean sweep again.”

Griffiths was celebrating yesterday when he netted the opener in the 3-1 Betfred League Cup victory over Partick Thistle at Firhill – his 99th goal for the Hoops.

He now has his sights on Suduva on Thursday in Lithuania during the Europa League play-off to claim that magical ton.