Celtic’s defence has broken records in each of the last two seasons. Last term we conceded 17 goals in 38 league games, an imperious record. This season we’ve conceded nine goals in seven games, a run of form which was already well established before the departure of Virgil van Dijk. So much has gone wrong in such a short space of time it’s difficult to narrow the focus down to a root issue.

Virgil will be a miss, without doubt, but he’s been in attendance for all but the last game of this season, so whatever’s going wrong, we’re not seeing the consequences of his departure yet. We lost Virgil’s junior partner from last season, Jason Denayer, who was replaced by Dedryck Boyata. Dedryck’s contributed to some of the defensive issues: he was culpable for both Inverness goals, for example.

One issue which I couldn’t figure after the Malmo game at Celtic Park, and which re-emerged at Pittodrie, was Mikael Lustig being drawn to the middle of defence, leaving a gap behind him. Jo Inge Berget scored for Malmo after being left unattended, while Aberdeen were unable to punish us from similar situations on Saturday.

Lustig is the definition of reliability, I don’t believe he’s abandoned his duties on the right flank without reason. If Lustig sees his two central defenders in front of the striker when an opponent has the ball on Celtic’s left, he’ll abandon the threat from the right to cover the space the striker has behind Celtic’s two central defenders. This is why we lost the first goal at home to Malmo and could have cost us again on Saturday.

Then there’s the goalkeeper. We’ve debated how a high ball into the six yard box should be the keeper’s ball, defenders should not be running back towards their own goal and challenging in an area where the keeper should win the ball, or take a foul.

There was a bit of shock when we lost goals like this from set-pieces against Malmo, but Aberdeen’s second goal was inexplicable. When the free kick was taken, Craig Gordon was standing on the spot where Paul Quinn met the cross from a moment later. If he stood still, the ball would have hit him. Instead of claiming the ball, Craig backed off and was stranded on his line as Quinn side footed the ball into the net.

Defenders shouldn’t be in this area. The goalkeeper should come out, knowing his own men will not get in his way, and that he can claim the ball unless he’s fouled by an opponent.

If all is going wrong in front of him, a goalkeeper should still be claiming balls into his six yard box, so Craig Gordon is without doubt not prepared when corners and free kicks have been fired into him, but I suspect more than this is going wrong.

It’s impossible to tell from the outside what’s actually going on in a defence but two key aspects of any defensive unit are trust and communication. You need to know where team-mates and threats are, and you need to know that you can rely on team-mates to do what’s necessary. I have my doubts that either have existed in any measurable quantity this season.

Where does authority lie?

Last season Virgil was Celtic’s defensive authority. He had a new central defensive partner, a new goalkeeper, and he was one of our best players, so the lines of authority were clear. This season nothing has been clear. The whole world knew Virgil was leaving last month, while he had another new partner, who had made a career total of 32 appearances. Dedryck has a lot to learn about the game, he’s going to need mentored, and unlike last year, when Jason arrived, his senior partner was in his final weeks at the club.

The full back positions are another area of concern. Emilio was dropped for two European away games, as we publicly looked for and then signed a left back, while Mikael Lustig returned to the team after a lengthy injury, before picking up a minor injury.

With all that going on, problems should not be a surprise, although it’s disappointing that this far into the season we’re still not cohesive. Ronny has some big decisions to make for Amsterdam. 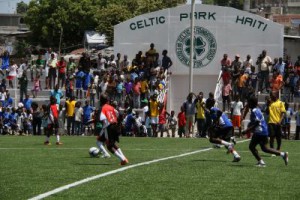 While all else can go wrong, the work of the Celtic Foundation continues to amaze. The photos of Celtic Park Haiti, which opened this week, a product of the Foundation’s work in the country, is a phenomenal monument to the work of Celtic fans. Well done.

You have just one more day to bid on our hospitality auction for the Foundation, take a look here on ebay. You can win hospitality at the Walfrid and attendance in the Directors’ Box for three people for Sunday’s game against Dundee, courtesy of club sponsor, Intelligent Car Leasing.

It’s a genuinely special prize, thanks to Intelligent Car Leasing for their support. Good luck with your bids.