CELTIC have been told they will have to stump up the cash for £5million-rated Spurs centre-back Cameron Carter-Vickers.

The Hoops had originally thought they could negotiate a loan deal for the 23-year-old US international, but have discovered any possibility of a temporary transfer is a non-starter – because the defender want to quit the London team on a permanent basis.

Talks are still ongoing between the clubs, but Carter-Vickers, who only has a year of his contract to run, is looking to kick-start his career elsewhere.

The back-four operator spent half a season on loan at Bournemouth in the previous campaign and the south coast outfit are showing an interest in making his wish come true for a full-time deal. Newcastle United and Norwich City, who lost out to Brentford in their pursuit of the Hoops’ Kristoffer Ajer, are also monitoring the situation. 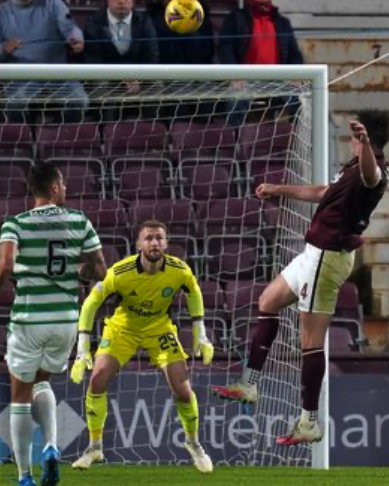 SOFT CENTRE…Nir Bitton is grounded as he watches John Souttar head in Hearts’ winner past the exposed Scott Bain.

There is also interest from Belgium for the player with Anderlecht and Club Brugge waiting in the wings for the eight times-capped US star, according to a report in the Daily Record.

Carter-Vickers joined the North London club in 2017 and has made only four first-team appearances. As well as Bournemouth, he has had loan spells at Sheffield United, Ipswich, Swansea, Stoke City and Luton Town.

Ange Postecoglou was forced to throw in Carl Starfelt for a quickfire debut against Hearts at Tynecastle at the weekend after the Swedish international stopper had just one training session with his new team-mates 24 hours earlier.

The £4.5million arrival from Rubin Kazan struggled in the 2-1 loss where Nir Bitton yet again failed to display any defensive instincts as a makeshift centre-back.

Christopher Jullien will be out until October with a knee injury and the Parkhead men know they will have to pay the cash if they want to continue their pursuit of Carter-Vickers.