ANGE POSTECOGLOU has revealed he plans to leave a legacy at Celtic as he zeroes in on his mission to uphold the club’s European traditions.

The Hoops boss will take his players into the first leg of the Europa League play-off final with AZ Alkmaar at Parkhead this evening as he pursues a personal dream.

The Champions League qualifiers came too early for the Greek-Australian gaffer – not helped by yet another howler from keeper Vasilis Barkas in the 1-1 draw at home to Midtjylland – but a two-legged victory over the Dutch side will fire the club into the group stage of the competition.

Postecoglou acknowledged the importance of the club being seen to do well on this crucial front and said: “Long after I’m gone, hopefully, I have made an impact at this fantastic football club. That’s what we all want to do.

“If you’re a manager, you want to do things that, hopefully, outlast your own tenure. That’s the opportunity in Europe.

“It’s why you come to a football club like this. You have that opportunity to repair or uphold the traditions of this football club.

“The traditions and values are that this football club has always made an impact in Europe, one way or another.

“That’s the opportunity that has been given to me and it’s definitely a motivation for sure. It’s big. ”

Postecoglou continued: “Of course, we’re disappointed at dropping out of the Champions League. This is our next opportunity, to progress to the Europa League group stage and it’s one that we want to take. 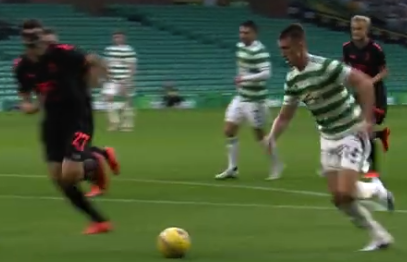 WE’RE ON OUR WAY…David Turnbull prepares to slot in the first of his double over the Czech opponents.

“If you told me we were going to lose money on this one, I’d still want to win it, I guarantee you that.

“I don’t see it as stepping up or stepping down. Every game has its challenge.

“We are talking about getting to the Europa League group stage and we would get good opposition then, so we can’t look at it that way.

“If we play the football we have shown in the last few games, whether that’s parts of the game or longer periods where we dominate, we will be difficult for any opponent, irrespective of their level. That’s our goal.”

Celtic have thumped in 16 goals in their past four successive victories and Postecoglou, speaking to the Daily Record, added: “It’s a good opportunity for us to build on that momentum. It’s another home game. We are on a good stretch of home games at the moment. It’s hugely positive.

“It was of great importance to us when we let fans back into the stadium that we gave them hope and some belief so that they could get behind us. And we have done that.

“It’s a European game against a really good opponent. I think it will be a cracking game, one that we can get some more positive momentum from.”