The Honduran international has lost his left-back slot to 18-year-old Keiran Tierney this season.
Izaguirre has reportedly been told by his international manager he needs to feature more in the champions’ first team if he is to continue representing his country. 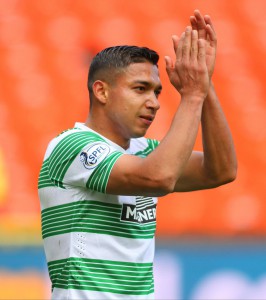 The 29-year-old defender, who arrived at Parkhead six years ago from Honduran club side Motagua almost six years ago, has been linked with moves to clubs in Spain and the United States this summer.
Deila confirmed that he had spoken with the former Scottish Player of the Year about the situation. Izaguirre’s last first team start was against Hamilton over a month ago.
The Norwegian said: “Of course, he has a future, we can’t have one full-back.
“It’s tough competition on that side. Everyone can see what KT has done, but everyone also respects what Emilio has done for this club.
“We know we have two very good full-backs. He’s a player we want to keep.
“I talk with Emilio lots of times. He comes into my office and we talk. Of course, he wants to play more, that’s for sure. Everybody in that squad wants to play.

“But it’s a competition and you never know in football. Something could happen with KT and also he can show in training that he is better.