Celtic Quick News on News Now
You are at:Home»Latest News»DEILA’S PRAISE FOR BRENDAN RODGERS
By CQN Magazine on 7th May 2016 Latest News

RONNY DEILA, who will leave Celtic following the last league game of the season against Motherwell a week tomorrow, has admitted he is “hungry” to make a quickfire return to management.
The Norwegian has already been linked with Borndby, but insisted he is unaware of any interest in him from the Danish club.
Deila said: “I want to stay abroad. I have done everything I can in Norway. I’ve been abroad now and want to stay abroad. Could I manage another club in Scotland? That’s hard to say, you never know in football.
Yesterday CQN reported that Ronny Deila is being serious considered by Dundee United to begin a complete rebuilding job at Tannadice following the club’s relegation on Monday evening after  losing 2-1 to city rivals Dundee.
“I don’t know anything about Brondby. Again, it is rumours and there will be a lot of rumours now. But Denmark is definitely abroad for Norwegians, just like England is for Scots! 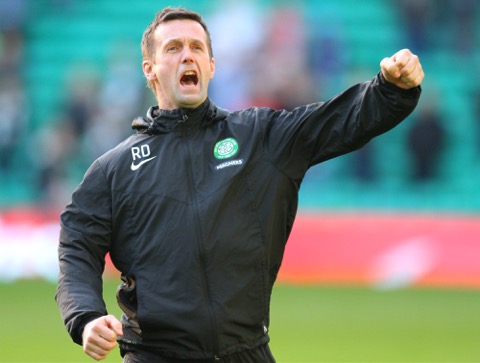 “What I know now is that I have three games left at  Celtic, then I’m going to have a vacation. But I am hungry to keep working as a coach. I have learned a lot at Celtic and I have gained a lot of experience.

“When I work again will depend on what kind of job is available. If the job is right for me, I can start at once. If it isn’t right, then I will just have a good time in Marbella and wait and see.
“The most important thing for me is that I suit the style of the organisation and how they run things at their club.
“I will take with me the wisdom that I have gained here. But it is going to be difficult to get as high pressure a job as I had here. It would have to be a very, very good football team.
“I don’t think there are a lot of clubs even in the English Premier League which have that pressure. I think you have to go to the top six or seven teams down there to get that.”

Meanwhile, Deila has praised former Liverpool and Swansea boss Brendan Rodgers following a shift in the betting which saw his odds slashed to become the next Hoops gaffer.

The departing boss said: “He’s a modern manager. He works a lot with processes and talks a lot with his players. He’s very good on the training pitch and he’s very determined and very clear in what he wants.

“He is a very nice human being. He did a good job at Liverpool and a fantastic job at Swansea. I have only positive things to say about him.”

——————————————-
Charlie Gallagher ‘s new biography is written by Celtic historian David Potter with forewords from fellow Lisbon Lions Willie Wallace and Tommy Gemmell. You can order your SIGNED copy HERE direct from CQN and we’ll also give you a FREE GIFT with your book!