ODSONNE EDOUARD was at the double again for the France Under-21 side in their 3-1 triumph over the Czech Republic in a friendly in Paris last night.

The on-fire Celtic striker notched two on his debut at this level in the 4-0 win against Albania last week, as CQN reported.

And the £10million hitman, the most expensive player in Hoops history when he joined on a permanent deal from Paris Saint-Germain in the summer after his successful loan deal, took centre stage again in the Stade de France.

The French youngsters were rocked when the visitors took the lead through Patrik Zitny, but Edouard led the instant rally and claimed the equaliser after some neat footwork in a crowded penalty box to open up the opportunity and he stuck it away from six yards with his usual nonchalance. 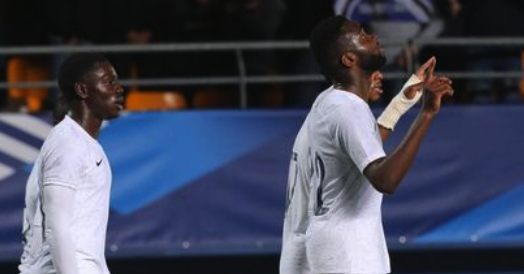 The classy attacker, 21, repeated the feat with team-mate Bryan Mbeumo, who helped set up the leveller, as the home side claimed the triumph in the second-half.

Edouard went into the Under-21 double-header off the back of a superb performance at Ibrox where he opened the scoring in the first-half against Steven Gerrard’s men and combined with fellow countryman Olivier Ntcham to set up Jonny Hayes for the stoppage-time strike to cement a 2-0 success.

Hamilton Accies on Saturday are now in his sights in the High Noon showdown and the French ace has happy memories of game at their ground.

He made his debut at Accies for the champions on September 8 2017 and marked the occasion with a goal in the 4-1 win.

It could be a case of deja vu at the weekend.