Celtic Quick News on News Now
You are at:Home»Latest News»DELIGHT FOR TURNBULL, DESPAIR FOR GRIFF
By CQN Magazine on 19th May 2021 Latest News

DAVID TURNBULL is one of six Celtic players included in Steve Clarke’s 26-man Scotland squad for next month’s Euro Finals.

The impressive midfielder, who arrived in a £2.5million switch from Motherwell in the summer, makes the international step up for the first time after representing the Under-21s on four occasions.

Hoops team-mates Ryan Christie, Callum McGregor, James Forrest and Greg Taylor have also been named as the Scots prepare to take part in a major finals for the first since the World Cup in France in 1998.

Centre-back Jack Hendry, who has played all season on loan at Belgian outfit KV Oostende, is in the squad that will play friendlies against Luxembourg and Holland as warm-up encounters before the real thing when Clarke’s side play in Group D and take on the Czech Republic at Hampden on June 14, England at Wembley four days later and Croatia in Glasgow on the twenty-second. 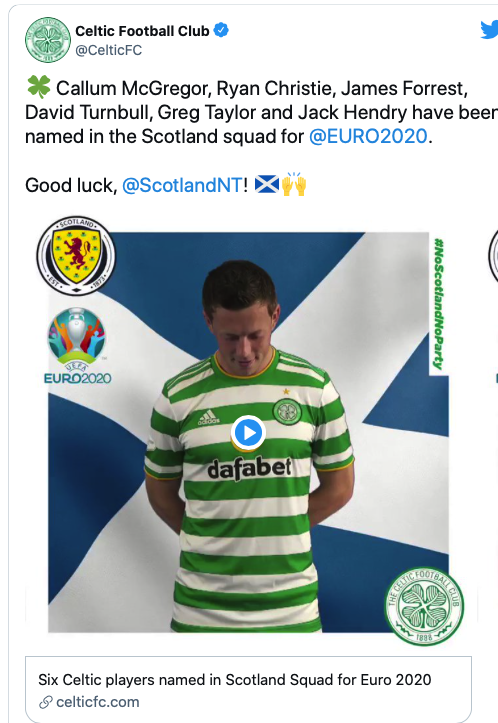 Clarke has rewarded Forrest for his efforts since his late comeback at the parkhead outfit after being sidelined with ankle and back injuries for a chunk of the season.

However, there is no place for 22-cap striker Leigh Griffiths who has struggled for game time at the fallen champions and managed only seven goals in a dismal campaign.