The Hoops boss, though, singled out the the talented trio of skipper Scott Brown and his fellow-midfield anchorman Callum McGregor and two-goal Ryan Christie PLUS the vocal visiting support.

It was crucial the champions did not slip up on the banana skin in the Highlands and, although they shipped an extremely soft goal, they made no mistake as they coasted to three points.

Chrsitie netted two in the first-half with a soft header from Ross Stewart sandwiched in between his strikes with Tom Rogic and substitute Mikey Johnston adding the others after the break that kept the Hoops at the Premiership pinnacle. 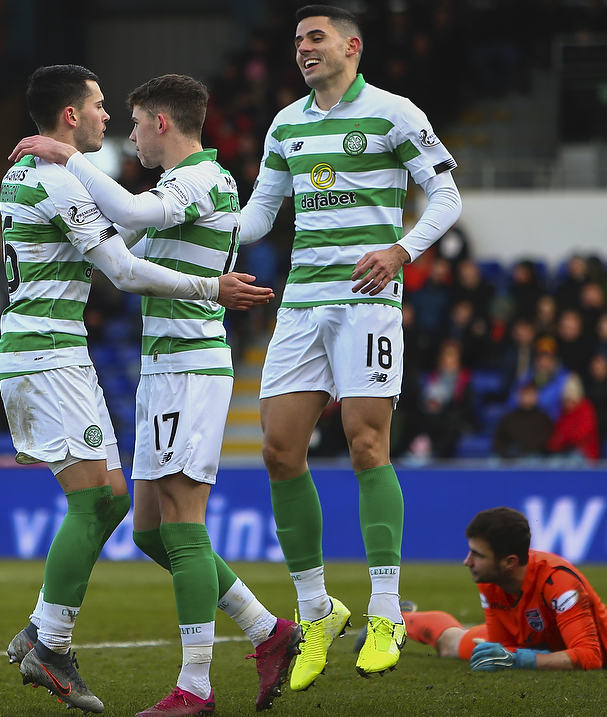 Lennon, speaking to the club website, said: “It was an excellent performance. I thought we started the game really well, we could have been one or two up before we got the breakthrough. And then we came off it a bit, I’m not sure if we slipped into cruise control, but we let Ross County back into the game.

“After that, our response again was very good – it was a great goal from Ryan, a great finish, and a great ball from Kris. At half-time, we wanted to get rid of the complacency, and just turn on the power a little bit more. We got that in a great second-half display.

“Ryan is in a great vein of form. He had a little niggle with his knee a few weeks ago, but now he’s back to full fitness and he’s a joy to watch and work with. He’s got a great appetite for the game, he’s got great enthusiasm, but, above all else, he’s an outstanding footballer and we’re seeing all of that at the minute.

“I thought Callum McGregor, again, was consistency personified. I thought he had a brilliant game. As did Broony, and I felt those three really set the template for the result. In the second-half, we looked a powerful threat. Going forward at times, we could cut County open at will.

“We also hit the woodwork twice, so it could have been a lot more than four.” 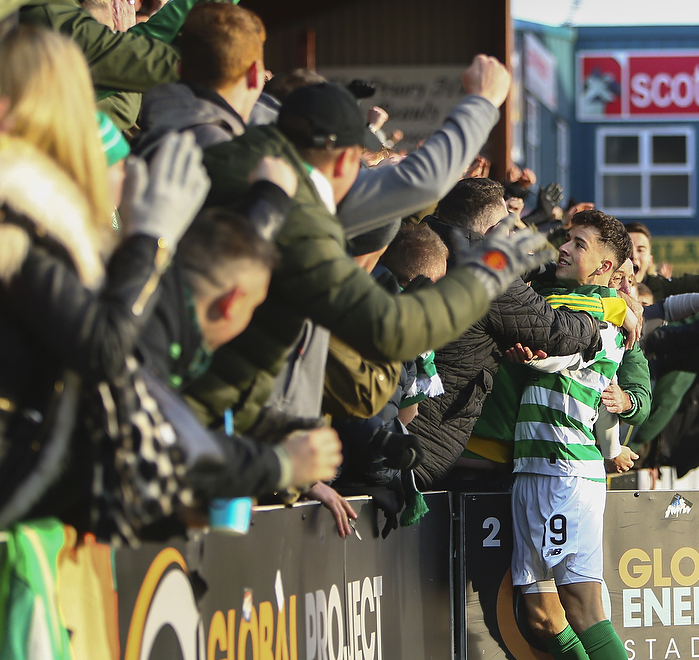 SUPPORTING CAST…Mikey Johnston celebrates with the fans after netting the fourth goal against Ross County.

Lennon was delighted to share the joy with the Hoops followers. He added: “I’ve got to pay tribute to the fans. I heard a story that there was a bus that left from Stranraer at half-past four in the morning.

“I said to the players before the game: ‘These guys travel a long way, and it’s up to you to entertain them. They’re coming to watch you because you’re creating a lot of good things at the minute, they’re enjoying what they’re seeing’.

“Hopefully, they have gone home happy.”

“I’m thrilled with the quality of performances we’ve shown at the moment. We’re on great goalscoring form, the goals are coming from a variety of positions. It’s a Utopian life, it can’t last forever, but the way they’re playing, we’ve just got to keep giving them a gentle cajoling along. We’re in a great place.”

Scotland’s title kings go in pursuit of three more points in midweek when Hamilton Accies visit the east end of Glasgow and then the focus will be on Hampden on Sunday for the Betfred League Cup Final against Steven Gerrard’s Ibrox outfit with the Hoops looking for their 10th successive domestic trophy.