DAVID TURNBULL admits Celtic players have had a wake-up call since the arrival of Ange Postecoglou.

The Scotland star is sparking in the revitalised midfield alongside skipper Callum McGregor and born-again Tom Rogic, a rejuvenated figure who has been given a new lease of life under his one-time Australia international manager.

Postecoglou makes no apologies for making huge physical demands on his team as he introduces his tried and trusted high octane methods at the club.

The Hoops gaffer expects his players to spare no effort in their endeavours to turn around the fortunes of the Parkhead club after last season’s lamentable campaign when it emerged that change was urgently required on and off the park to get the side back on track. 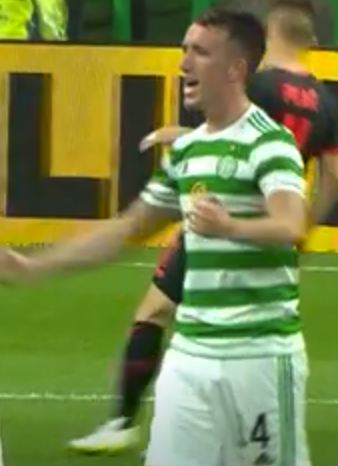 HOOP HOOP HOORAY…David Turnbull hails the first of his double salvo in the 3-0 win over Jablonec.

Postecoglou underlined the challenging and taxing situation and the onerous tasks that will be placed upon every individual by insisting the squad needs strengthening to maintain quality and numbers and allow rest and rotation which is vital to continue the tempo on a match-by-match basis.

Asked if the training ground and game-time exertions led to more sleep, Turnbull smiled: “Maybe a wee bit. I’ve always been a bit of a napper!”

However, the hard work on the pitch and the training ground at Lennoxtown is being rewarded by some praiseworthy performances with 18 goals scored in five successive wins as the Hoops turn their sights on St Mirren in the Premiership at Parkhead tomorrow afternoon.

Turnbull, who is enjoying playing in front of crowds in the east end of Glasgow for the first time a year after his £2.75million arrival from Motherwell, said: “The manager is always demanding more of us, whether it’s in training or in games.

“He’s always telling us before and at half-time to keep working hard, keep pressing for the team and win the ball back and that gets a good reaction from everybody. It’s been good. 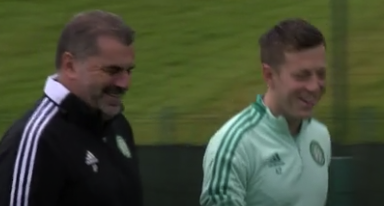 TWO OF A KIND…boss Ange Postecoglou and skipper Callum McGregor at Lennoxtown.

“That’s the way he wants us to play and everybody is buying into it and it’s working on the pitch so far. We all want to go out there and express ourselves and that’s what we’re doing.

“We’re working hard in training, but at the moment it’s a tough schedule, so there’s not as much training as we’d like.

“That’s what I’m sure all the boys would want and, personally, I’m feeling a lot fitter. I’m feeling great and it looks like everybody else is, as well.

“It’s just getting his ideas across and getting boys in and the team that he feels is right at the moment. We are all gelling together. It’s working so far, so long may it continue.”

A new Celtic has emerged in recent weeks with Postecoglou working to a hectic schedule on and off the pitch. The Greek-Australian hasn’t even been in Scotland for fully two months, but already he has taken the team to Denmark and the Czech Republic and they face a test in the Netherlands on Thursday when they take a 2-0 advantage in the Europa League final play-off to face the dangerous AZ Alkmaar. 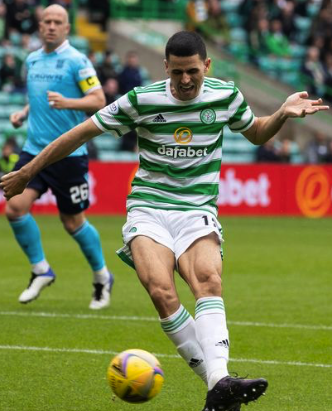 BY THE LEFT…Tom Rogic scores in Celtic’s 6-0 rout of Dundee.

New signings such as Kyogo Furuhashi, Joe Hart and Liel Abada have caught the eye while others such as James Forrest, Ryan Christie, Stephen Welsh and Anthony Ralston have also responded.

Turnbull is revelling in an eye-catching midfield and he commented: “We know what Tom can do, he’s magic on the ball.

“I have played against him a good few times, so I knew how good he was. And training with him all last year and this year you can see his class and he brings that to the table. That’s what we’re wanting.

“And I love playing with Cal when he’s sitting behind me he always finds the ball and he manages to find me or Tom in the pocket. It’s great to play alongside both of them.” 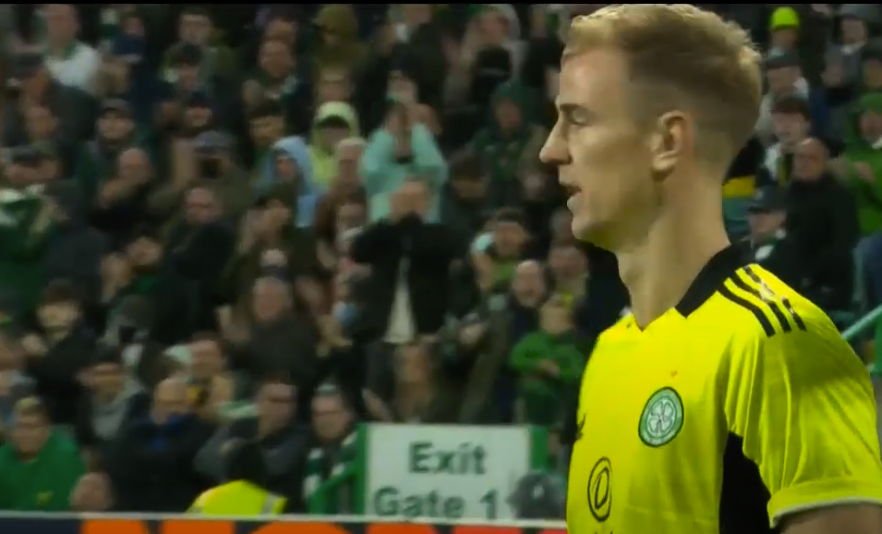 Turning his attention to the defence, Turnbull praised the influence of 34-year-old former England international keeper Hart who made two invaluable saves against the Dutch in midweek while adding poise to the last line that was missing throughout the previous term.

The elegant 22-year-old playmaker, speaking to the Daily Record, added: “Since Joe has come in he’s been excellent. You see the save he pulled off on Wednesday night in the first few minutes. That’s what we need.

“Every game we’ve played he’s looked very comfortable and he’s playing the way we want to, as well.

“It was a tough game, we knew going into it that we had to be on our game and we were and we came out with the win.

“It gives us a lot of confidence, and the past few games, too, it’s breeding through the team and everyone else involved. I think you see that on the pitch. It’s just about continuing with that.”