Celtic Quick News on News Now
You are at:Home»Match Report»DEMBELE SPOT ON AS CELTIC COAST TOWARDS MAGNIFICENT SEVEN
By CQN Magazine on 31st March 2018 Match Report

CELTIC were in cruise control as they eased to three more points while zeroing in on their seventh successive Premiership title with this triumph over the Highlanders at Parkhead this afternoon.

Brendan Rodgers will be satisfied on so many levels with the comprehensive victory that allowed him to welcome back Leigh Griffiths to the first team as a second-half substitute.

Patrick Roberts also got another opportunity to stretch his legs while Stuart Armstrong looked eager to be involved right from the off.

The energetic midfielder claimed the second goal after Moussa Dembele had opened the scoring via the penalty spot in the first-half. Tom Rogic claimed a well-deserved third as the Hoops prepared for Wednesday’s visit of Dundee.

There was never any doubt where the points were going, but there was a fifth-minute wake-up call for the Hoops when the Dingwall outfit broke forward, made a couple of neat passes and presented Billy McKay with a reasonable opportunity, but Scott Bain looked alert and got down to make a competent save.

Four minutes later. Dembele thumped one off target as the champions stepped up the tempo. Armstrong was looking lively and had adopted a shoot-on-sight policy with a couple of whizzbang efforts that were just wide. Then he brought Aaron McCarey into play with a low drive, but the keeper parried the effort and grabbed the rebound.

In the 22nd minute, Armstrong executed a clever right-wing corner-kick that picked out Scott Sinclair at the near post, but his drive whipped just wide of the upright.

The inevitable opening goal was only delayed until the 25th minute when a rash trip from Jason Naismith felled the rampaging Sinclair in the box.

Referee Steven McLean had little option but to point to the spot and Dembele made a first-class job with the penalty-kick as he stroked the ball into the keeper’s left-hand corner of the net as McCarey took off for his right.

Celtic continued to surge forward and Dembele and James Forrest had efforts from range that were of more concern to the occupants of Row Z than McCarey.

The Dingwall outfit were reduced to 10 men in the 30th minute when the rugged Andrew Davies was rightly banished following a crazy and brutal stamp on Scott Brown.

The skipper was on the ground following another challenge as the red mist descended on the County defender and that left the referee to swiftly display a card of the same colour.

There were no complaints from the disgraced Davies as he cut a pathetic, dejected figure as he exited the pitch and headed for the tunnel.

With County on the back-foot, the champions were queueing up for a shot at goal and in the 43rd minute the ball was knocked back to Forrest who stepped up to fire waywardly wide of the upright.

Before the interval, McCarey limped off to be replaced by former Hoops reserve shotstopper Scott Fox whose first touch was to clutch a right-foot curler from Sinclair.

Boss Rodgers made a change in defence for the start of the second-half with new Bhoy Jack Hendry coming on for Dedryck Boyata. 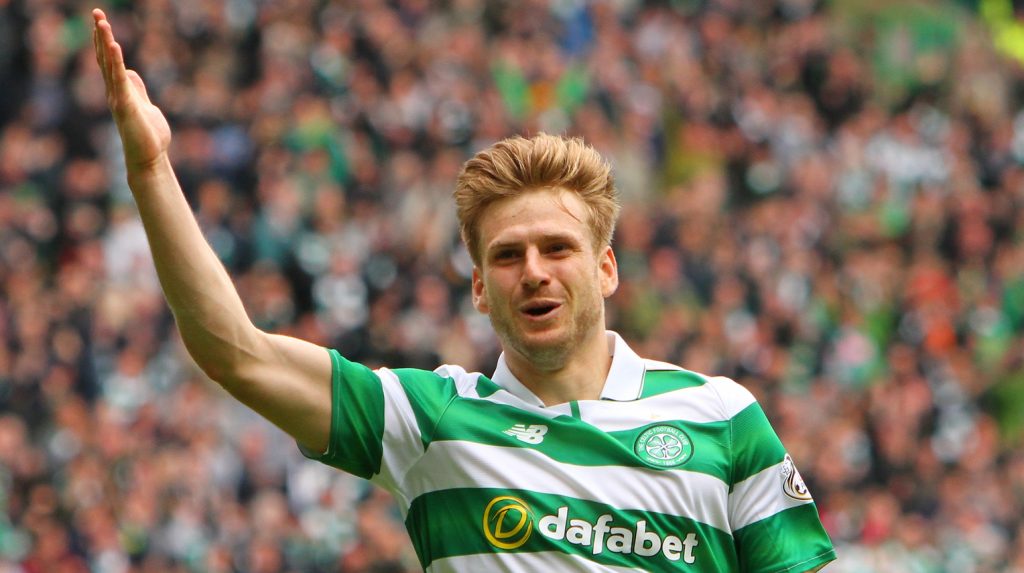 DOUBLE UP…Stuart Armstrong who scored the second goal in the rout against Ross County.

Three minutes into the restart, Armstrong doubled his side’s advantage with the goal his enterprising play well and truly deserved.

Forrest carried the ball across the box and the Scotland international playmaker took over to take a couple of touches before sizzling a low left-foot drive wide of the static Fox.

The third goal arrived on the hour mark and once again Forrest was involved with a neat ball in to Rogic who had been gliding around the midfield with subtlety and menace.

The Wizard of Oz bamboozled central defender Liam Fontaine with a quick switch of feet, carried into the box and nonchalantly swept the ball low past the exposed keeper.

Three minutes later, Rodgers introduced Roberts for the impressive Forrest who went off for a well-earned rest and shortly afterwards Griffiths came on for Dembele for his first appearance in two months.

A few minutes later, the comeback frontman, just three short of 100 goals for the Hoops, nodded down a left-wing cross into the path of Rogic, but the Aussie’s first-time volley was off target.

The Hoops kept possession, oozed class and confidence as they breezed towards the finishing line.

That double treble is edging ever closer.