CELTIC have confirmed that the vital away league match to Dundee has now been set to take place on Tuesday, April  5 (kick off 7.45pm).

The game was initially postponed on December 30 due to Dens Park being waterlogged and was then put off for a second time due to Celtic’s participation in the Scottish Cup in which Celtic can reach the final without having faced any top league side. 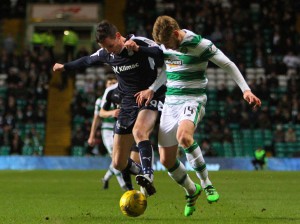 Sunday’s semi-final draw saw the 4 in a row Champions paired against the lower league Glasgow side founded in 2012 after the death of Rangers. The supporters of the deceased club have rallied behind the new club and hope to achieve a shot on target this time, having failed to manage this in the only previous meeting on February 1, 2015. That match took place at Hampden in the League Cup and Celtic won 2-0.

Celtic’s re-arranged game at Dens Park will  crucial in the club’s pursuit of 5 in a row and comes after Hearts visit Celtic Park on April 2 and  before another  away match at Motherwell on April 9.

The weekend after that Celtic are at Hampden for the Scottish Cup semi final.