A Dermot Desmond interview! Remember him? It’s been a while since we’ve seen or heard from our major shareholder, so I am pleased STV got hold of him. His absence for so many years is not in itself an offence, but there has been no evidence he remains engaged with the club, and that’s not healthy.

His comments on Ronny Deila I agree with. Ronny is here because we think he can improve players and therefore improve the team. The evidence cited by Dermot Desmond (Nir Bitton, Tom Rogic), suggests he’s able to do this. There have been downsides of course. Ronny’s twice fallen in the Champions League to lesser-resourced (although decent) teams.

If we’re going to build a team we need to be patient enough to let the guy get on with the job.

The comments about a British league within 10 years are worth examining at a later date, but for brevity: this is no more than blue-sky thinking.

I agree in principle that technological changes are underway which will undermine the BSkyB business model. This model relies on the pull of English Premier League football to deliver high-value subscription rates from a huge portion of the UK population.

We talked in the summer about the switch to what the Americans call ‘cutting the cord’; moving away from expensive subscription TV to watching feeds streamed from foreign broadcasters, effectively free of charge. This is happening and its impact will only increase.

I know lots of CQNers are already consuming their English football in this manner, it works and it’s practically undetectable (i.e. it really is undetectable). But it’s not easy yet. You need to know what you are doing, and you need decent broadband. Products are improving all the time, as is broadband provision. Soon paying £100 per month for TV, as many do, will be a goodwill option.

Should there be even a modest shift in BSkyB’s ability to generate huge revenue from EPL football, the fallout in the English football bubble (it is a bubble) will be swift and structurally damaging.

Getting to the point. English football has a business model with risks which could bring it down. Technological changes are underway which undermine this model. Lots will happen in the next 10 years.

Kodak had a great marketing slogan, they called a great image a ‘Kodak moment’, when people would turn to their cameras to capture the memory on Kodak paper. The phrase was turned on its head in recent years when the realisation that Kodak’s entire business model was about to be destroyed by digital cameras.

The moment of realisation became the ultimate ‘Kodak moment’, it now meant a moment when you realise technology is about to wipe you out. Those who were saying this about Kodak 20 years ago were mocked. Some of us already think we’ve seen English football’s Kodak moment.

This is Kodak’s market capitalisation between 1989 and 2012, where was your Kodak moment? 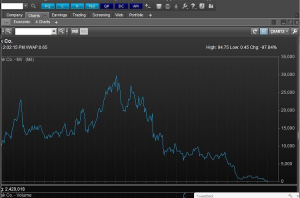 Magners have kindly offered some CQNers access to the Fanzone at their Wellpark Brewery, just a few minutes walk from the stadium, on Thursday afternoon, from 4pm until 7pm.

Here’s the deal, email me at celticquicknews@gmail.com and you’ll go in the draw for a ticket.  Give a £1 (or more) to one of the Great Scottish Runners below, in aid of your Foundation, and you will feel a lot better about enjoying the pleasures of Magners’ Fanzone.  Put Magners in the subject line, to make sure your entry gets to the right place.

There will be not be many entries, so if you can make it, get busy…

Thanks to all who’ve contributed already, you’re absolutely brilliant!