Celtic Quick News on News Now
You are at:Home»Football Matters»DESPITE THEIR CRISIS…’I WANTED TO PLAY AT CELTIC,’ SOLSKJAER
By CQN Magazine on 5th November 2015 Football Matters
MOLDE boss Ole Gunnar Solskjaer admitted he is “envious” of his players who get the opportunity to perform at Celtic Park in this evening’s 6pm kick-off.
The former Manchester United striker scored some vital goals at important venues, including the winner at the Nou Camp against Bayern Munich in the 1999 Champions League Final.But one ground that eluded the Norwegian was the home of Molde’s opponents tonight.
He said: “It is a fantastic place to play football and I am sure all the boys are looking forward to it. 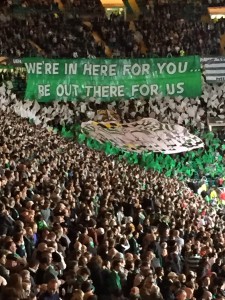 “I have only been here as a spectator before. I never had the chance to walk out to the pitch, so in one way I am very envious of the players who will get to feel the atmosphere.
“The atmosphere here could probably match the top clubs in the world like Manchester United, Barcelona and Real Madrid.”Solskjaer, 42, scored against Celtic in the Champions League at Old Trafford in September 2006, but it still rankles that he missed the return game in Glasgow two months later through injury.

He has had to make do with visits to the world famous stadium as a guest of former United team-mate Roy Keane, who latterly had a spell with the Hoops.

“I was here with Roy Keane to watch a couple of games and it is fantastic, it is like football should be,” recalled Solskjaer. “It was a Champions League game, if I remember correctly – they never asked for tickets from Roy, they just opened the door so he could walk straight through.