ODSONNE EDOUARD fired in a fabulous hat-trick as scintillating Celtic stretched their superb unbeaten sequence against against Scottish opposition to a stupendous 67 at Parkhead this afternoon.

Substitute James Forrest thumped in two on another day of celebration for the champions to send the fans home happy.

Even Motherwell can’t have any complaints about the inevitable outcome on this occasion. 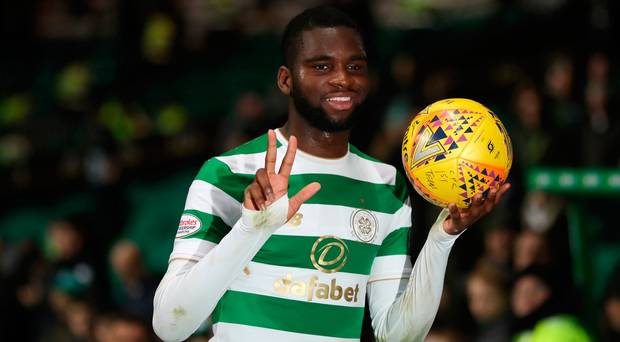 Brendan Rodgers, with an eye to the Anderlecht Champions League encounter on Tuesday, freshened up his team for the third successive meeting with the Fir Park outfit.

The four took the opportunity to impress the Hoops boss. Striker Edouard, on a season-long loan from Paris Saint-Germain, hit the headlines with a magnificent hat-trick, but Rodgers would have been more than satisfied with the input from the other three.

Ajer looked comfortable bringing the ball out of defence, Ntcham was precise in practically everything he did and Hayes was lively and definitely had the beating of Charles Dunne for most of the game before making way for Forrest.

The champions were eager to get the job done against Well and Scott Brown combined with Hayes early on, but the Irish winger’s clever cross was frantically headed for a corner by Richard Tait.

The Celtic skipper was booked for a challenge on Louis Moult by erratic referee Kevin Clancy who overlooked other such offences throughout the 90 minutes.

It took only 16 minutes for the Parkhead men to cut their way through the retreating rearguard to open the scoring.

Scotty Sinclair, in a determined mood for most of the afternoon before being taken off as a precaution near the end, slid an inviting cross into the penalty box and Edouard’s timing was perfection as he zipped the ball home from close range.

Brown then left the field with blood gushing from a mouth wound after Moult had thrown out a reckless arm. The match official didn’t even give a foul as the midfielder had to have running repairs.

Clancy reached for his little black book, though, when Tait lunged into a tackle and sent Sinclair spinning. There was no getting away from a yellow card on that occasion.

In the 33rd minute, Celtic doubled their advantage and once again it was the impressive Edouard who did the damage.

Hayes distracted the Well defence with an intelligent dummy run and the PSG teenager did a step-over before slotting the ball low past Trevor Carson from 20 yards.

Motherwell’s answer was a foul by Alan Campbell on Kieran Tierney that earned him a booking.

The first-half came to a halt with the home players and fans still baffled by a Tom Rogic effort being ruled out.

The Aussie World Cup midfielder raced through an open gap to knock the ball under Carson and it first it looked as though Clancy had awarded the goal. Amazingly, his assistant eventually raised his flag and the ‘goal’ was ruled out.

The Well contingent on the touchline didn’t contest the decision. Strange, that, because they normally like to protest about what they interpret to be unusual decisions.

Celtic picked up where they left off at the start of the second-half with Edouard going close with a header.

Remarkably, and completely against the run of play, Well pulled one back in the 65th minute through Eliott Frear. The Hoops rearguard fell asleep as a ball dropped into the area and the Fir Park attacker managed to get a toe to the ball to send it spinning beyond Craig Gordon.

That stung the champions into retaliation and Carl McHugh was the next visitor to go into the book for a foul on Rogic.

The game was all over bar the shouting in the 76th minute when Forrest cut inside before sending a delightful effort wide of Carson.

Number five arrived in the 88th minute when Rpgic and Stuart Armstrong, on for Sinclair, combined and Forrest clipped an exquisite shot off the outside of his right boot past the Well keeper.

It was a thoroughly well deserved victory for Celtic. Motherwell might think otherwise, though!

CQN Man of the Match – Odsonne Edouard, a sensational performance!