Celtic Quick News on News Now
You are at:Home»Latest News»DIDN’T HE DO WELL? KT ON STAND-BY
By CQN Magazine on 23rd February 2019 Latest News

KIERAN TIERNEY could end over TWO months of pain and anguish at Parkhead tomorrow afternoon.

The Celtic left-back has not made a first team appearance since the 2-1 Europa League Group B encounter against RB Salzburg in the east end of Glasgow on December 13.

A persistent hip problem has sidelined the Scotland international defender and Brendan Rodgers left him out of his travelling squad for Thursday’s 1-0 last-32 exit against Valencia in the Mestalla.

Tierney, who has missed FIFTEEN consecutive matches, remained at Lennoxtown to work on his fitness and the Hoops boss has rewarded him with a place in the player pool for the visit of Motherwell on Premiership business as the champions go in search of three more points in their bid for an eighth successive title. 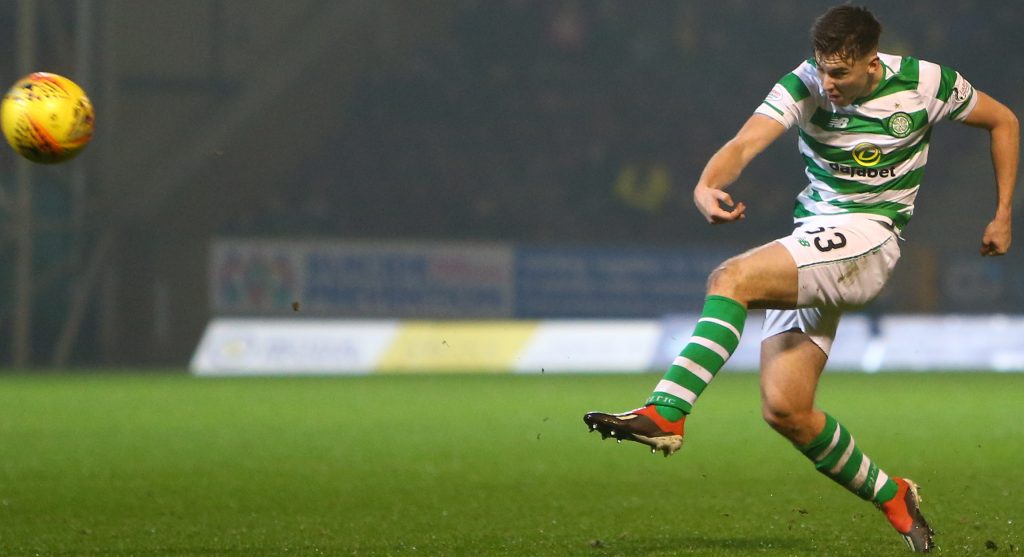 BEST FOOT FORWARD…Kieran Tierney flashes a shot at goal against Motherwell at Fir Park on December 5 – his last Premiership appearance for the Hoops.

However, as one favourite is on the brink of a long-awaited and welcome comeback, another will drop out.

Skipper Scott Brown will miss the game against the Fir Parkers as he serves a one-match suspension following his second yellow card when referee Bobby Madden deemed he had overdone his goal celebrations following his 90th-minute winner against Kilmarnock at Rugby Park on Sunday.