Celtic Quick News on News Now
You are at:Home»Football Matters»DISAPPOINTMENTS FOR LAMBERT AND CALDWELL
By CQN Magazine on 18th April 2016 Football Matters
TWO ex-Celtic captains and potential future managers had disappointing weekends as their sides slumped to disappointing defeats, just like Celtic.
PAUL LAMBERT blamed his lacklustre Blackburn Rovers players for the 2-0 home defeat from Huddersfield.
The former Celtic skipper wasn’t impressed and said: “We were the architects of our own downfall today. The first goal was a catalyst, a catalogue of errors.
“In football, you’ve got to play with enthusiasm and be ready for matches and their two goals summed up our afternoon.

“I thought there was a real lack of energy.”

Nahki Wells’ volley and a Matt Kilgallon own goal helped the Terriers earn a comfortable two-goal win..
Lambert’s side, who have failed to win in their last four games, dropped to 18th in the Championship table, are only nine points clear of the relegation zone.
GARY CALDWELL admitted he had no complaints as title-chasing Wigan crashed 3-1 to Doncaster. 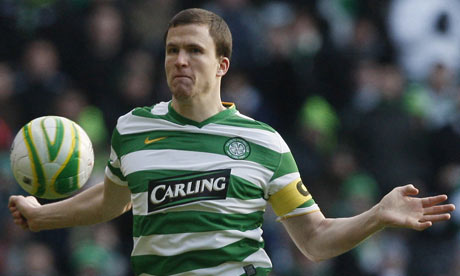 The League One leaders looked poised to extend their 20-match unbeaten run when Will Grigg netted before half-time.
However, the visitors, without a win in 17 outings, came back to snatch the points after David Perkins was sent off.
Former Celtic and Scotland skipper Caldwell said: ” It was a poor performance at a time when we didn’t need it.
“We got what we deserved, Doncaster were the better team for the whole 90 minutes and deserved to win – it’s as simple as that.
“We lacked a bit of composure and struggled all day.

“I thought we were still in the game at 2-1, but that red card all but ended the game.

“Unfortunately, we just didn’t get going at all. Overall, it was a flat display from most of my players.

“It’s in our hands and we are in a fantastic position. There are four games to go and we’re well capable of winning them all.

“This was a bad day that, hopefully, will give the players a wake-up call.”
Andy Butler netted twice for Rovers before Perkins was sent off after bringing down Gary McSheffrey and Andy Williams converted the penalty-kick to seal the win.
Caldwell’s outfit are still three points ahead of Burton Albion who were held to a goalless draw at home against Barnsley.
Meanwhile former Celtic manager TONY MOWBRAY praised John Fleck after a moment of magic helped Coventry City to a 2-1 win over Millwall.
The Sky Blues were struggling for an equaliser after Byron Webster had given the visitors the advantage in the 20th minute. 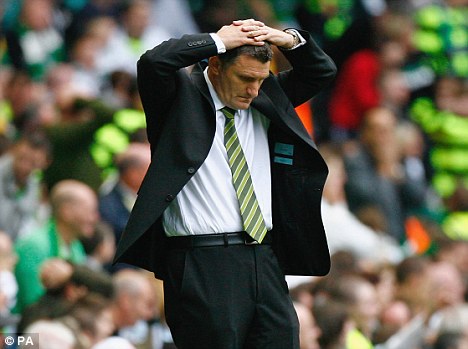 Former Scotland Under-21 star Fleck levelled with a superb 30-yard strike just after the hour mark and Marcus Tudgay got the winner shortly afterwards.
Ex-Celtic boss Mowbray said: “Fleck’s goal was worth the admission – for our fans, but maybe not Millwall’s!
“John has been the epitome of of consistency this season and he’s a wonderful footballer.
“He came into the dressing room after the game tripping over his tongue because he was exhausted.”
Millwall finished the game with 10 men after Shaun Williams was red-carded and Mowbray added: “On the balance of the play, this win was deserved, but it’s never easy to play against a team with a player short.
“However, we saw it home and now we have to see if we can put in a strong finish to the season.
“It’s important for our the supporters to see that we are fighting for every point.”
Williams was dismissed in the 26th minutes when he appeared to headbutt Ruben Lameiras.
Lions’ gaffer Neil Harris said: “The sending-off was a big blow. Having just looked at it quickly, I’ve got no complaints.”