CHRIS SUTTON believes Neil Lennon MUST throw his summer signings in at the deep end at Ibrox tomorrow.

The former Celtic striking hero believes his former Hoops team-mate has to discover the pedigree and quality of the captures in the crunch confrontation with Steven Gerrard’s outfit.

Both sides square up in the High Noon showdown with 100 per cent records after three Premiership games while the eight-in-a-row champions occupy their usual spot at the summit once again and prepare to repel all threats from challengers in a new campaign.

Sutton insists the Parkhead gaffer has to show his faith in the new Bhoys – in particular left-back Boli Bolingoli, who has had a rough time since his £3million move from Rapid Vienna last month.

It’s sink-or-swim time for the Belgian defender and the other arrivals in Govan with the eyes of the world looking on and only a few hundred Celtic fans in the ground to offer support. 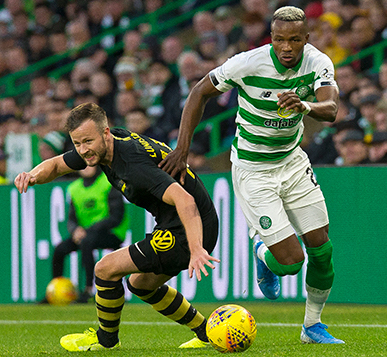 Sutton, writing in his Daily Record column, said: “Neil Lennon doesn’t have many options and he simply has to trust in his new recruits.

“The latter is just in the door from Stoke City, but he says he wants to play. Now’s his chance.

“Injuries to Kristoffer Ajer, Hatem Abd Elhamed and Jozo Simunovic will force Lennon’s hand and Bauer will need to jump in at the deep end.

“The Austrian had a tough time at Stoke last season, but he’s a decent player with good pedigree.

“It’s not easy going straight in to an Old Firm clash, but he just needs to block it out and get on with his own game.

“The rest of the back four is needs must and Celtic have to trust in their recruitment.

“Some of the criticism of Bolingoli has been unfair.

“He had a couple of ropy games, but has shown signs of finding his feet.

“The finger was pointed at the penalty on Thursday night in Stockholm, but I thought he was unfortunate. 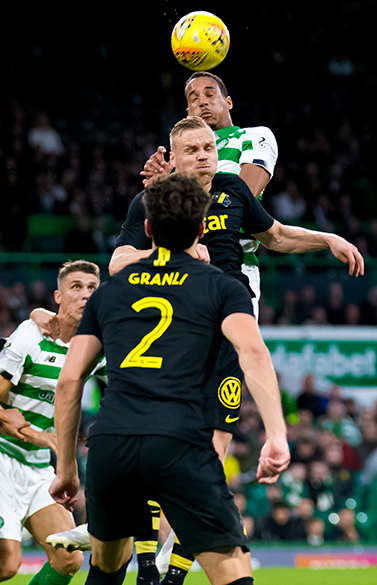 HIGH AND MIGHTY…Christopher Jullien reaches for the sky.

“It was a mistake to leave him out against Cluj in the Champions League qualifier, but there’s no way Lennon can play Callum McGregor at left-back at Ibrox.

“It would be one heck of a kick in the bollocks for Bolingoli if he did.

“I think he will come good, he’s quick, athletic and dangerous going forward. He needs to be more secure at the back, but it could come.

“Jullien, as well. He’s played the last couple of games and has looked the part. I thought he was excellent in both legs against AIK.

“It could be seen as a risk pitching in three rookies, but that DOESN’T apply to Fraser Forster in goal.

“I rate him and he’s the best keeper on the books at Celtic. It’s an easy decision.

“I think the rest of the team for tomorrow is pretty straightforward, as well.”

Sutton added: “The petty Ibrox ticket factor shouldn’t be an excuse – it should be a motivation.