The extraordinary sequence was capped at a deserted ground a year and a day ago when Kristoffer Ajer lashed the decisive penalty-kick past former team-mate Craig Gordon for the team’s spot-kick triumph following the 3-3 extra-time stalemate with Hearts in the delayed 2020 Scottish Cup Final. 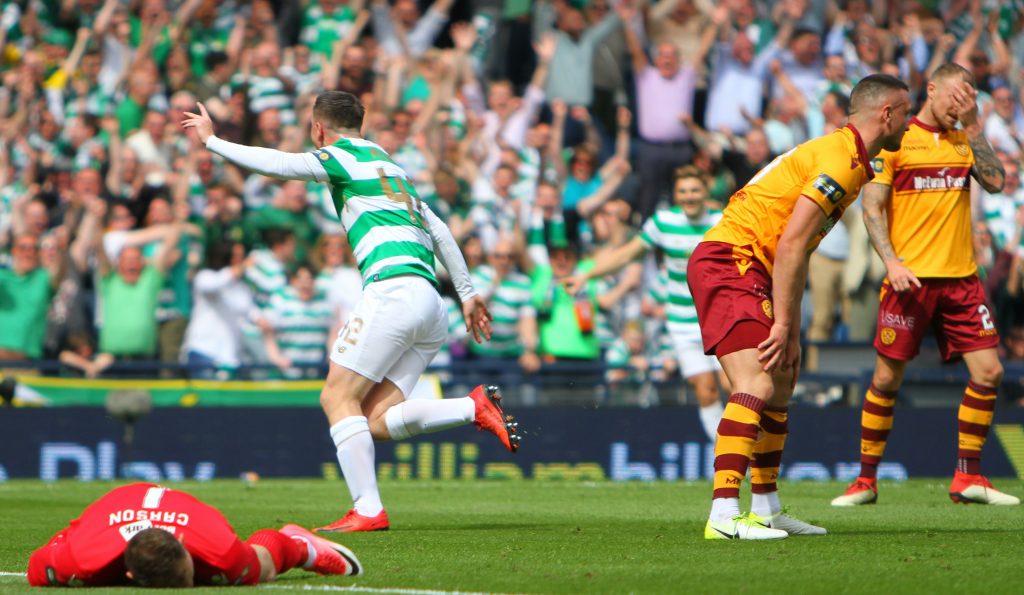 GOAL-DEN BHOY…Callum McGregor races away in triumph after thumping in the eleventh-minute breakthrough goal against Motherwell in the 2018 Scottish Cup Final.

Before that astonishing run kicked off, McGregor had picked up a medal as an unused substitute in Ronny Deila’s side’s 2-0 League Cup victory over Dundee United in 2015.

Amazingly, the 28-year-old anchorman had sampled Cup wins in the south side of Glasgow even before stepping up at Parkhead.

McGregor earned four winners’ medals in the Hampden-staged Youth Cup Finals from 2010 through to 2013 – featuring from the start in three, with the other badge earned while he was on the bench.

When the victorious march through the vital encounters was mentioned, the Hoops star joked: “Don’t jinx me!”

The Scotland international smiled and continued: “My record’s pretty good there and obviously we hope to continue that on Sunday, but that becomes a lot of hard work – preparation, dedication and a wee bit of good luck as well along the road.

“I’ll need to kick on all those things to have a good day…here’s hoping.

“Everybody would love it to be an easy game with no pressure, but Finals are never like that. There’s always a period in the game when you’re under pressure and the other team are in the game, so the experience you can draw on can help you through that and stand you in good stead.

“You need all that.” 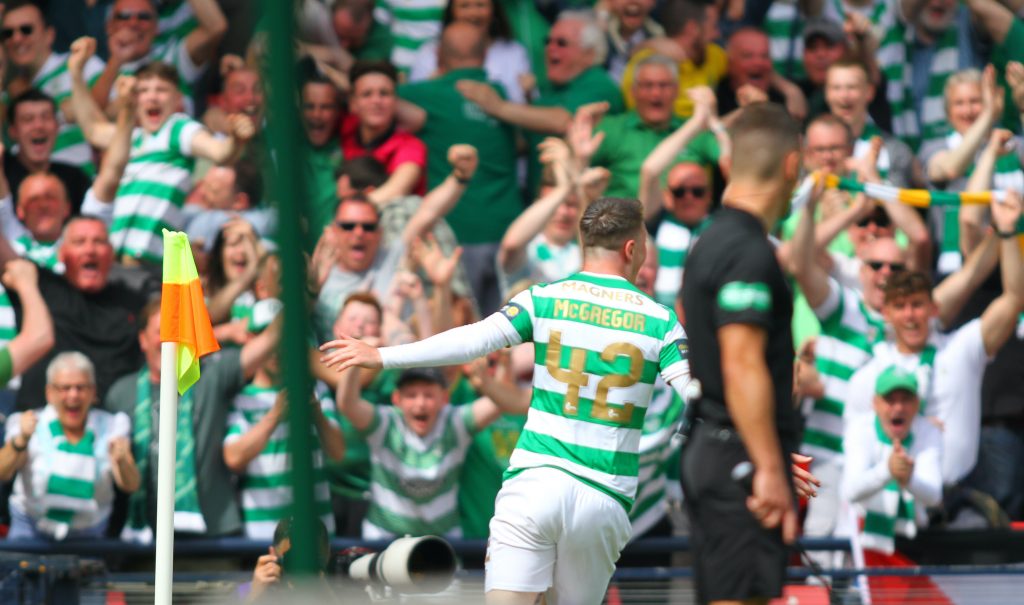 HAMPDEN ROAR…Callum McGregor celebrates with the delighted Celtic fans after his opening goal in the 2-0 win over Motherwell in 2018.

There will be no Scott Brown to lead out the team tomorrow as McGregor takes the responsibility of the armband, an honour bestowed on him by Ange Postecoglou at the start of the campaign.

The influential midfielder, speaking to The Scotsman, added: “In terms of preparation and doing the right things going into the game, it’ll feel pretty similar.

“The worst thing you can do is overthink it and start doing things differently. It’s a process and if you trust the process and it works you stick with that.

“There’s obviously the tag of being captain, but I’m not even thinking about that. I just want to perform and help the team to take the trophy and that’s my sole focus.”

McGregor would undoubtedly enjoy staging an action replay of his eleventh-minute opener against Motherwell in the Scottish Cup Final in 2018.

Olivier Ntcham added a second in the 25th minute as Brendan Rodgers’ men coasted to their second consecutive treble.