FORMER Celtic keeper Alan Rough would have no hesitation in playing Jeremie Frimpong in the Betfred League Cup Final at Hampden on Sunday.

The Amsterdam-born right-back played his seventh first-team game in the 4-1 triumph over Ross County in Dingwall on Sunday.

Now boss Neil Lennon could field his transfer-day deadline signing from Manchester City against Hamilton Accies at Parkhead tomorrow night and hand him his ninth appearance against Steven Gerrard’s Ibrox outfit at the national stadium at the weekend. 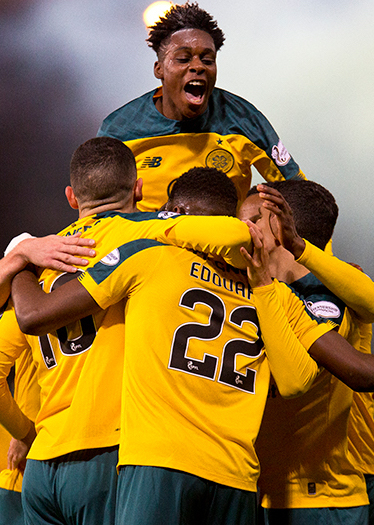 HAPPY DAZE…Jeremie Frimpong joins in the celebrations in the 5-2 win over Hibs.

It would mark a meteoric rise for Frimpong – and could be the ideal early birthday gift for the youngster who celebrates his 19th birthday two days after the silverware shoot-out.

With Israeli international Hatem Abd Elhamed ruled out with a groin strain, it is a straight choice between Frimpong and Austrian Moritz Bauer, on a season-long loan from Stoke City, for the No.2 position.

Rough has joined the growing army of admirers of the adventurous, attack-minded defender who scored his first goal for the Hoops in the 4-0 victory over Aberdeen at Pittodrie in October.

“True to tradition, he is an attacking full-back. He’s in the other half more than in his own. 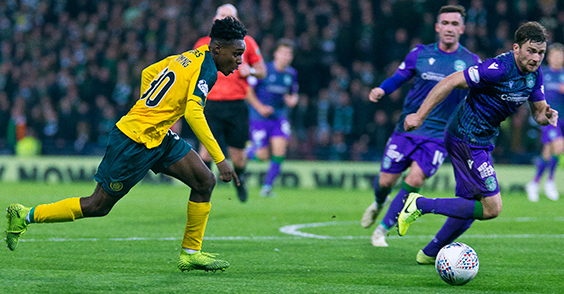 ON THE RUN…Jeremie Frimpong attacks the Hibs defence.

“So everything is positive going forward. I just think the only worry that some people might have is defensively if he comes into a game where he’s going to have to defend. We haven’t seen that yet but, who’s to say he won’t come up with the goods?”

Frimpong has played in the previous two games in the Betfred competition – he made his debut in the 5-0 quarter-final win over Partick Thistle and kept his place during the 5-2 hammering of Hibs in the semi.

Celtic have won all seven of the encounters in which the teenage sensation has played, scoring THIRTY goals and conceding only three.