McGregor has been outstanding during this campaign and answered the club’s SOS when he stepped into skipper Scott Brown’s position when the skipper was missing for eight games following his hamstring injury in the 4-2 win over Hibs on October 20.

Calmac is also in contention for the SPFL top award which will be announced next month, but he has admitted team-mate James Forrest has got to be favourite. 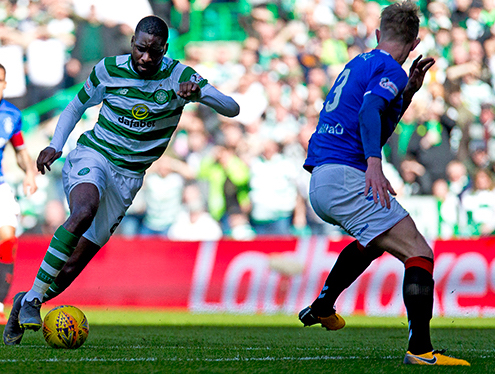 ONE GOAL COMING UP…Odsonne Edouard prepares to score against Gers.

Kristoffer Ajer was named Young Player of the Year after the 20-year-old Norwegian international became a mainstay in the middle of the rearguard.

French ace Odsonne Edouard lifted the top goalscorer award for his 20 goals in 49 appearances in his first season since becoming the club’s record signing at £10million from Paris Saint-Germain after his initial loan period.

But he was pipped for the Goal of the Season award which went to captain Brown for his howitzer in the 5-0 Scottish Cup triumph over St Johnstone in February.

Mikey Johnston lifted the Academy Player of the Year trophy and Keeva Kennan was named Womens’ Player of the Year while there was a touching moment when kit lady Angie Thomson – who sadly passed away earlier this month – was give the Special Recognition award.

The popular figure worked behind the scenes at the club for over 30 years.