SCOTT SINCLAIR, the hat-trick hero on Sunday, proved he was human after all when he missed a vital penalty-kick in the disappointing stalemate with the well-organised Firhill outfit.

The English attacker, who was unstoppable against Hearts, was given the ideal opportunity to give the Hoops the lead for the second time – but, amazingly, squandered the chance.

Thistle had just levelled Sinclair’s earlier strike through Adebayo Azeez in the 64th minute when Callum Booth flattened Cristian Gamboa in the box for a certain penalty a couple of minutes later.

Sinclair strode forward confidently, but, on this occasion, his effort lacked direction and keeper Tomas Cerny pulled off the save.

The Maryhill men made the most of the lifeline and held on for a shock point at Parkhead.

Eboue Kouassi, the club’s £2.8million arrival in January, was given his first start in a new-look line-up.

Brendan Rodgers decided to rest a host of first team regulars and Tom Rogic, who hasn’t played this year, had to be content with a place on the subs’ bench at kick-off.

Perhaps understandably, the Hoops didn’t quite match the champagne performance in winning their sixth successive title in five-star style at Tynecastle.

Patrick Roberts was in the thick of the action in the goalless first-half, but was out of luck with his finishing.

He fired in a vicious left-foot drive just before the half-hour mark that was blocked by the stubborn Thistle defence.

Only moments later, he thumped in another, but Cerny was equal to the task.

And once more the on-loan Manchester City winger, who has become such a favourite with the champions’ fans, had yet another effort repelled by a desperate defender.

Nir Bitton had the first opportunity in the 21st minute, but his angled header drifted over the bar.

New Bhoy Kouassi also walloped in one from outside the box, but his elevation was out as that, too, swept too high.

And in the 40th minute it was Callum McGregor’s turn to thump one over Cerny’s crossbar.

The deadlock was broken five minutes after the turnaround when Roberts set up Sinclair who despatched a right-foot shot wide of the keeper.

Boss Rodgers made a double substitution in the 62nd minute when he put on Stuart Armstrong and Rogic for Kouassi and Izaguirre to pep up the team.

However, within two minutes, Parkhead was stunned into silence when Christie Elliott slid a pass in front of Azeez who thumped a right-foot shot beyond the helpless Craig Gordon, who had been a virtual spectator up until that point.

Then came Sinclair’s penalty miss and the Hoops surged forward in numbers looking for the winner.

It was prove to be a night of frustration, though, with a barrage of efforts being blocked, saved or going wide or over.

TEAM: Gordon; Lustig, Simunovic, Sviatchenko; Gamboa, Kouassi (sub: Armstrong 62), Bitton, Izaguirre (sub: Rogic 62); Roberts, McGregor (sub: Aitchison 78), Sinclair.
Order your copy of IN THE HEAT OF LISBON, select your size for the great JOCK STEIN LISBON t-shirt and all profits will go to presenting a gift from the Celtic support to the CELTIC squad of 66/67. Order at www.cqnbookstore.com or click on the ad below. 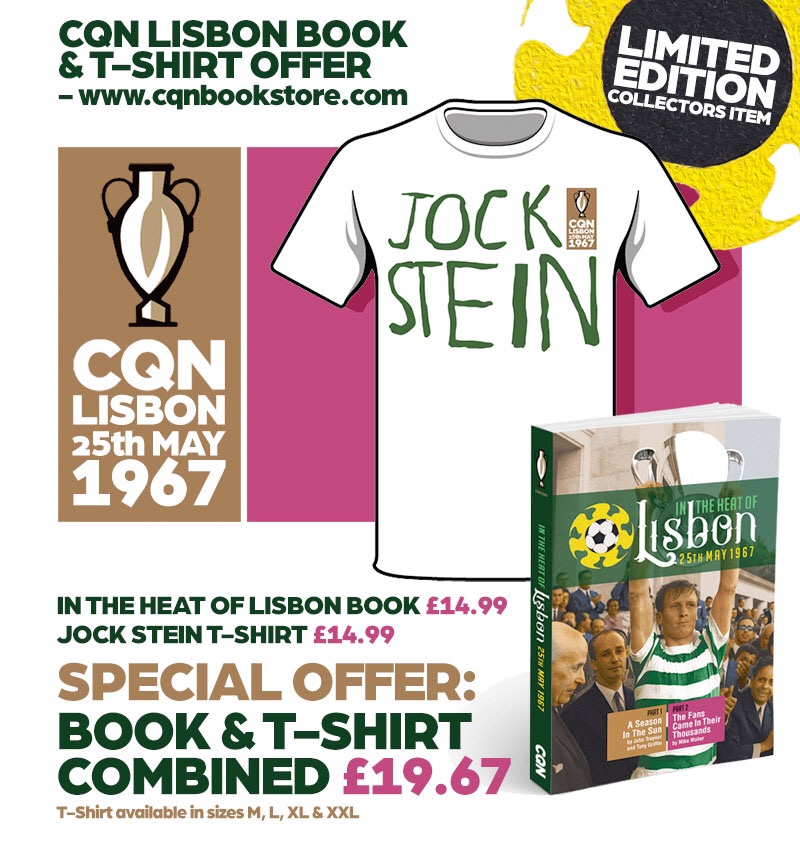 Ask Not What The Lisbon Lions Have Done for You…