Celtic Quick News on News Now
You are at:Home»Football Matters»‘DREAMS AND SONGS TO SING,’ CELTIC’S POTTER IS JUST MAGIC
By CQN Magazine on 10th March 2017 Football Matters
David Potter has written more than one Celtic book a year since his debut, Our Bhoys Have Won the Cup!, was released in 1996.
Over the last two years, he has published two Lisbon Lions’ autobiographies and he has an eye on a third!
Charlie Gallagher? What a Player! was released by CQN Books in 2016, and recounted the story of a Celtic figure who described himself as a “Nearly Man”.
David Potter captured Charlie’s tale poignantly, and rubber-stamped (if verification was ever in doubt) the inside-forward’s importance during Celtic’s golden age and entertained us with his wonderful biography on the original Holy Goalie John Fallon, a man who has been Celtic through and through all his days.
Paul John Dykes caught up with fellow Fife dweller, David Potter, for CQN as the pair spoke about all things Celtic:
How did your love affair with Celtic begin?
“I had no choice! My father was Celtic daft, but was also football daft which prevented him ever becoming a bigot. As I once said about him, ‘On his heart was written CELTIC in such large letters that there was no room for hatred or rancour towards anyone else’.” 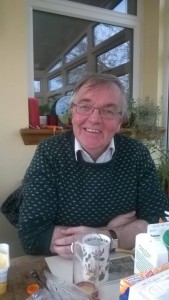 What are your earliest memories of watching Celtic?

What types of Celtic songs can you remember from the terraces back then?

“Erin’s Green Valleys”, “Follow Follow, we will follow Celtic”, “There’s not a team like the Glasgow Celtic”, and “Hello, Hello, we are the Timalloys, Hello, Hello, You’ll know us by the noise, We f***ed the Rangers in the Cup, ‘Twas great to be alive, Not one, not two, not three, not four but five” – commemorating the Scottish Cup semi final win in March 1925 and still sung about over 30 years later. ‘The Celtic Song’ came out in 1961, and September 1 1962 was the day I first heard ‘Sean South of Garryowen’ at Tannadice Park.”

“Not being allowed to go – I was too young – and coming home from the pictures to find my father rambling and incoherent about 7-1 after hearing various rumours on the way home which I didn’t believe.”

With so many talented individuals playing for the club in the 1950s, why do you think that Celtic were only sporadically successful during that decade?

“Poor management. Poor training. A certain amount of vision, but no real coherent plans to develop it.”

During the dark days of the early 1960s, could you ever have imagined the glories that lay in wait?

“No. If anything, there was a fatalism that this was the way it had to be and the way it always would be. The Church, the Press, the Royal Family, the “people who ran society” all seemed to side with Rangers and worship their wealth.”

How was Jock Stein able to transform the team he inherited in the mid-1960s into the European champions?

“Choosing and developing good players, bringing out the best in Bobby Murdoch by changing his position, improving training along with Neil Mochan to make it enjoyable, manipulating the Press so that Rangers were marginalised, and giving the players and supporters belief in themselves. He also deserves great credit for rooting out the hooligans who were a considerable menace at that time.”

Where were you the day that Celtic won the European Cup?

Which elements (if any) do you miss most about the football of your youth?

“None really. Football is far better now as a spectator sport. Behaviour and everything has improved, and a lot more middle class people go, and particularly more women. The really encouraging thing for the future of Celtic is the amount of women of child bearing age who go.”

What prompted you to write your first Celtic book? How long had you planned to embark on the project? How did you approach the research, writing, and publishing process?

“My first book was Our Bhoys Have Won The Cup! with a chapter on each of the 30 Scottish Cup triumphs from 1892 until 1995. I had already done them all as a series of articles for the Celtic View, and it seemed logical to try it as a book. The only problem was finding a publisher and I had many rejections, but eventually a now long gone publisher called John Donald in Edinburgh took me on.”

You have now written over 20 books on Celtic. How are you able to maintain such a prolific output? Can you tell me more about the writing process you employ?

“Simply because I love it and it is so much part of my life, I keep thinking of little other than Celtic and their past, and the secret is to get an idea and then work on it QUICKLY so that the enthusiasm does not wane. If you get an idea, DO IT.”

Having worked with such writers as Tom Campbell and Marie Rowan over the years, what do you most enjoy about the collaborative process?

“Each person has his/her own input. Tom loves the 1950s, Marie is more interested in the very early days and “bad” men (she is also a first class crime writer), whereas I probably go for the romantic figures like Quinn, Delaney, Gallacher and McInally.”

You are often cited as part of the holy trinity of Celtic historians along with Tom Campbell and Pat Woods. Can Celtic fans ever hope to see the three of you working on a book together?

You have recently worked on two autobiographies. What were the main challenges of working with these ex-players on their life stories?

“Not upsetting anyone! Both were different characters. John (Fallon)had a few bees in his bonnet, whereas Charlie was such a lovely man and probably didn’t realise how great a player he actually was.”

Are there any other ex-players out there whose story you’d be interested in working on?

“John Clark, perhaps, but he doesn’t seem to want one done.”

What are the main differences between the world of publishing now, compared to when you released your first book?

“None really. It is all a whimsical, quixotic, unpredictable business.”

What other projects are you currently working on?

“None on Celtic at the moment. One on cricket, and another on Forfar Athletic.”

If you were to name a Celtic team made up of the finest players you have witnessed, who would make your greatest XI?

Which CSC are you a member of and what is your typical routine of watching Celtic these days?

“Joseph Rafferty, Kirkcaldy. Leave 12.15 for a home game on a Saturday, arrive about 1.45, go and talk to John Fallon and others at the Celtic Superstore, buy some chips, go in to my seat in the Lisbon Lions stand. Away games are all different. I don’t go to them all because you actually do see the game better on TV, and once I have been to every ground, there is not always the desire to go back, as long as the game is on TV.”

In all your years of watching Celtic, how does the current manager and team compare?

“Up there with the best, but now Brendan must implant in them the belief and conviction for Europe. We must not go out expecting to get beaten. We must not listen to all the SKY Sports/BBC stuff about how good English football is. We must believe we can beat them all. That is why we wear the green and white. Willie Maley envisaged Celtic being the best in the World. So do I.”