Celtic Quick News on News Now
You are at:Home»Latest News»DUFF: CELTIC IN NO RUSH
By CQN Magazine on 28th May 2020 Latest News

CELTIC No.2 John Kennedy insists the champions will not be in a rush to replace Damien Duff.

The 100 times-capped Republic of Ireland hero has quit the Hoops for family reasons and will take up a post alongside new international boss Stephen Kenny.

Duff had been a key figure for Neil Lennon since the manager’s return to the club in February last year following the swift departure of Brendan Rodgers to Leicester City.

Ex-skipper Stephen McManus and Darren O’Dea, who, like Duff, is a former Republic of Ireland star, are among the former Hoops aces who have been linked with the vacant coach’s position.

However, 36-year-old Kennedy, speaking to the Daily Record, said: “Me and Neil have spoken about things although no decision has been made yet.

“Damien was a great addition to the coaching team. He’s a terrific guy and with a great mentality.

“He has a young family who had to move back to Ireland. They didn’t settle. Damien was fully committed to Celtic, spent so much time in his role. 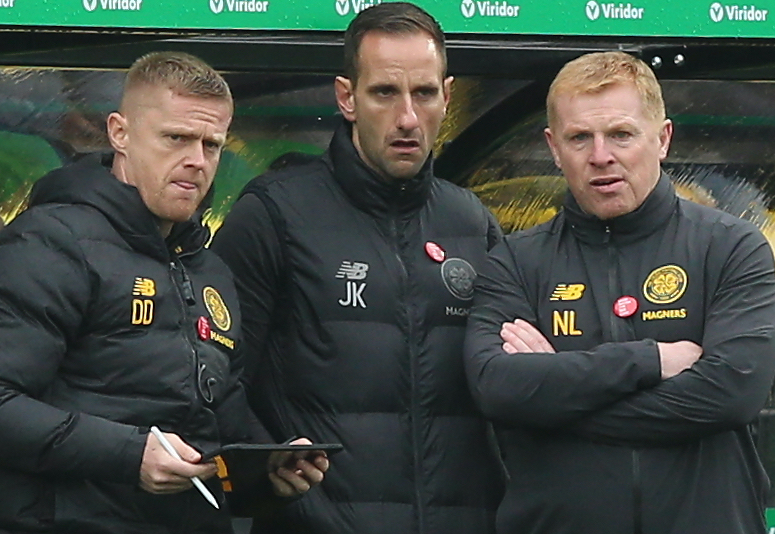 THREE CHEERS…Damien Duff, John Kennedy and Neil Lennon on their way to another title success.

“But, ultimately, he had a young family who needed his support back home and he had to make a very tough decision.

“He was gutted, but it wasn’t the FAI taking him back to Ireland, it was his family. Secondary to that, the FAI job became available. It was disappointing to lose him, but we understood.

“We’ll look to confirm his replacement in the coming weeks. We’ve looked at a number of options.

“There are guys within the club who could fit the bill while we’ve also got a lot of connections outwith that who also fit the bill.

“It’s not a necessity having a Celtic background, but probably an understanding of the club and the job will help.

It makes sure you’re not caught by surprise coming in. We won’t rush.”