SHANE DUFFY’S loan move to Celtic has been “an absolute disaster”.

That’s the verdict of former Hoops centre-back Adam Virgo, a one-time £!.5million buy from Brighton by Gordon Strachan in the summer of 2005.

Republic of Ireland international Duffy saw his dream come true when the Amex Stadium club agreed to his £2million temporary switch to his boyhood idols in the summer.

It was thought the 6ft-plus powerhouse central defender was the final piece in Neil Lennon’s jigsaw to make sure the Parkhead side gatecrashed history again with their tenth successive title.

However, the team inexplicably came off the tracks in their quest and any hopes of a record-breaking championship triumph were buried in the landslide of wretched performances and equally dreadful results.

In the aftermath of such a sensational nosedive in fortunes, Lennon lost his manager’s job at the club and recruitment chief Nick Hammond has also just joined him through the Parkhead exit, as CQN reported.

Virgo, 38, a versatile performer who could play in the middle of the rearguard or midfield, looked at Duffy’s move to Glasgow and said: “Celtic spent a lot of money despite it only being a loan deal, but it’s been an absolute disaster.

“That’s football – you think some players will rise to the occasion and really blossom and others will struggle.

“When Shane Duffy signed for Brighton, pundits were applauding him and I’m sure if you read the comments below the picture of him signing for Celtic on social media then every fan would have said ‘brilliant signing’.” 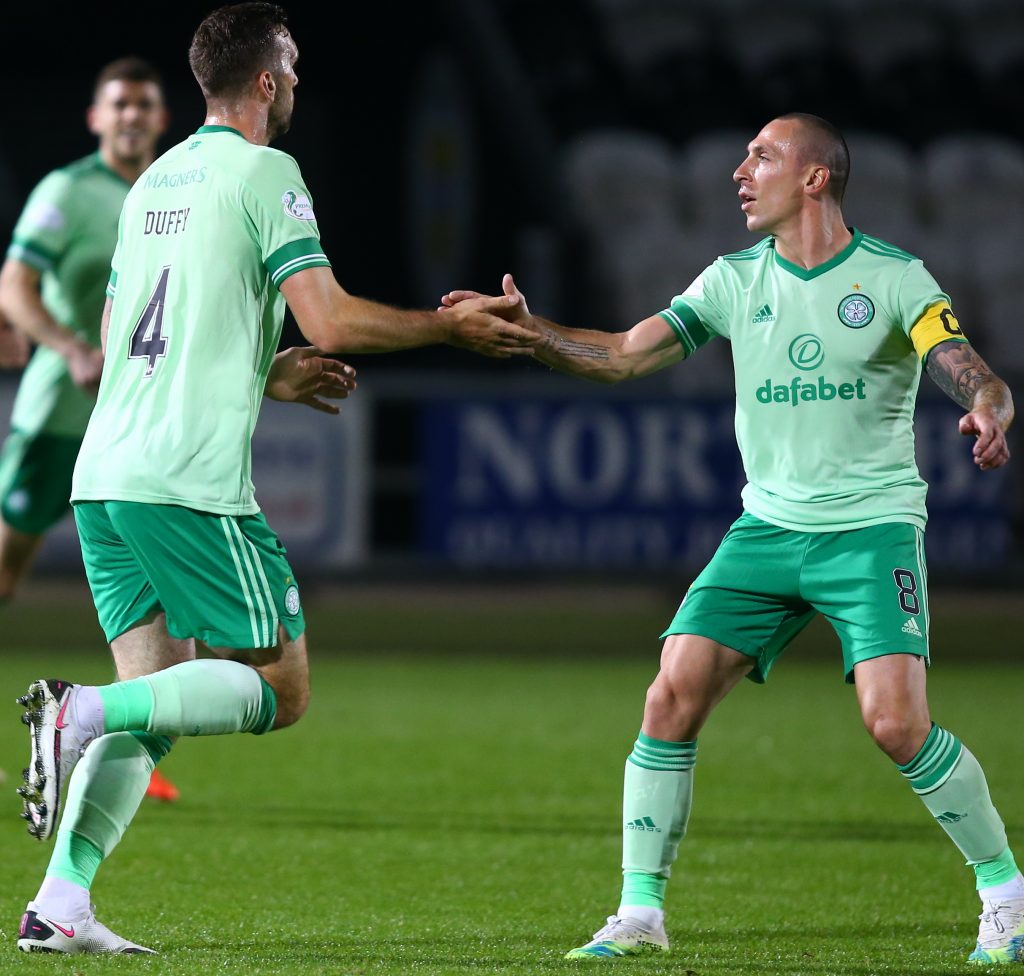 THAT’S MY BHOY…Scott Brown congratulates Shane Duffy on his goal in Paisley.

Virgo, who was loaned to Coventry City after one season at Parkhead, speaking to the Daily Record, added: “It seemed like a signing Celtic needed. I don’t know him personally, but it feels like when things go against him it completely goes against him.

“When he first signed for Brighton from Blackburn, he made a few mistakes early on and I feel when things are going against him it’s difficult for him to get out of it.”

Duffy’s loan deal expires in the summer and he will be heading back to the south coast outfit.

At least, the rugged back-four operator will have a winner’s medal to look back on during his time at his idols.

Duffy was in the line-up that sealed the phenomenal quadruple treble when they beat stubborn Hearts in the Scottish Cup Final five days before Christmas. Rookie keeper Conor Hazard was the unlikely hero with two superb penalty saves in the spot-kick shoot-out after the silverware showdown had ended 3-3 after extra-time.