Celtic Quick News on News Now
You are at:Home»Latest News»DUFFY RESCUE HOPE
By CQN Magazine on 6th May 2021 Latest News

SHANE DUFFY is in soccer limbo after his disappointing loan season at Celtic.

The Republic of Ireland international centre-back hasn’t figured in any of the Hoops’ last three squads and his £2million temporary transfer is due to expire in 25 days’ time.

Duffy will return to Brighton where he has two years left to run on his £45,000-per-week deal.

CQN understands the 29-year-old defender will discover Graham Potter, manager of the south coast, has no plans for him to rejoin his first-team player pool.

Duffy has made only 14 starts for the Parkhead men after making a goalscoring debut in the 5-0 win over Ross County in Dingwall on September 12. 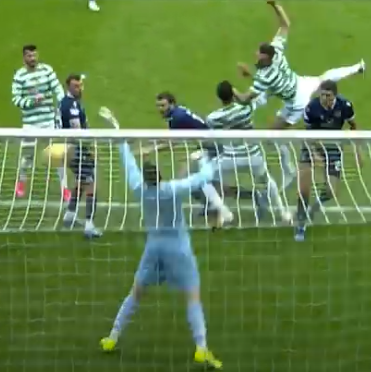 He followed that up with the equaliser in the 2-1 victory over St Mirren in Paisley in the following match.

However, the Derry-born player endured a torrid time as the campaign developed and he has rarely been seen this year. Neil Lennon brought him in with the club paying a hefty loan fee and also picking up his wages.

He was seen as the perfect foil in the heart of the rearguard alongside Christopher Jullien, but a back injury to the Frenchman on Duffy’s first appearance saw him ruled out for a chunk of the first half of the season and he injured a knee in one of his comeback games against Dundee United on December 30 that ruled him out for the remainder of the term.

Duffy couldn’t cope in a leaky defence as the quest for the historic tenth successive title came off the rails.

GETTING THE NOD…Shane Duffy heads the equaliser against St Mirren in Paisley with Kristoffer Ajer getting a close-up view.

However, he did join in the team that clinched the phenomenal quadruple treble against Hearts in the Scottish Cup Final on December 20, so he will have a memento of his period with his boyhood heroes.

Derby County gaffer Wayne Rooney could throw Duffy a lifeline – if his struggling outfit remain in the Championship.

They are two points above the drop zone and face fellow-relegation contenders Sheffield Wednesday at Pride Park on Saturday with a 12.30pm kick-off in their final game.

If they are successful in their battle for the lives in the second tier, Manchester United and England legend Rooney could make his move to bring in Duffy during his summer rebuild.