Celtic Quick News on News Now
You are at:Home»Match Report»DUNDEE UNITED 0 CELTIC 3: 30 NOT OUT AS GIAKOUMAKIS HITS DOUBLE
By CQN Magazine on 14th March 2022 Match Report

A DOUBLE from Giorgos Giakoumakis following the opener from skipper Callum McGregor saw Celtic stretch their unbeaten domestic run to 30 games as they claimed a place in the Scottish Cup semi-final at Tannadice tonight.

It was a repeat scoreline the last time the Hoops were at the same venue in December and once again it was well-merited. The immediate reward is a last-four confrontation with Giovanni van Bronckhorst’s Ibrox outfit at Hampden next month.

The breakthrough strike arrived in the 12th minute following a well-rehearsed corner-kick routine on the right.

Matt O’Riley shaped to send the ball into the mix in the congested penalty area, but neatly knocked a short pass to James Forrest who placed the ball in front of McGregor.

The Hoops captain moved into the box before lashing a low left-foot drive at goal. It looked to be heading straight into the net, but it still took a touch off Nicky Clark before flying past the helpless Benjamin Siegrist.

The strike took the sting out of United’s early play as they swarmed all over the visitors at a pace you had to doubt they could maintain throughout the entire 90 minutes-plus.

Reo Hatate was booked by referee John Beaton after a full-blooded challenge on Kieran Freeman. Shamefully, the home players, almost to a man, appealed for a red card.

McGregor, O’Riley and Hatate were enjoying a lot of possession in the middle of the park as they probed for openings while Josip Juranovic and Greg Taylor were willing workers on the flanks.

Early on, Giakoumakis was struggling with the pace of the game and his touch was off. Thankfully, he got it sorted after the interval.

The Hoops had the ball in the net again, but the match official controversially ruled it out declaring a handball from the Greek striker.

Forrest and Juranovic combined in a lightning break on the right with the Croatian international firing a dangerous low cross into the box.

Giakoumakis had the opportunity to knock it in from close range, but, as a United defender threw himself in front of him, he got his feet in a fankle and diverted the ball up onto his hand.

Daizen Maeda raced in at the far post to tuck the rebound behind the stranded Siegrist.

Clearly, it was an accidental handball, but Beaton was having none of it and mysteriously disallowed the effort.

NO GOAL…Daizen Maeda slides the ball beyond keeper Benjamin Siegrist, but it was ruled out for a handball against the onlooking Giorgos Giakoumakis.

It was a genuine reprieve for the home side, but to Ange Postecoglou’s players great credit they got on with the game. However, it was an odd decision by a match official who has history with the Parkhead club.

Only moments after the no-goal, McGregor left the United keeper motionless with a ferocious left-foot drive from just outside the box, but his attempt sizzled just over the crossbar.

Giakoumakis was presented with a half-chance in the 39th minute, but he tamely hit a ball yards off target from 12 yards.

Tom Rogic replaced Hatate at the start of the second-half with Postecoglou taking no chances of the Japanese midfielder picking up a second yellow card.

Four minutes after the interval, Callum Butcher was yellow-carded after hauling down Giakoumakis and he was joined in the book afterwards when Ilmari Niskanen did likewise with Juranovic. 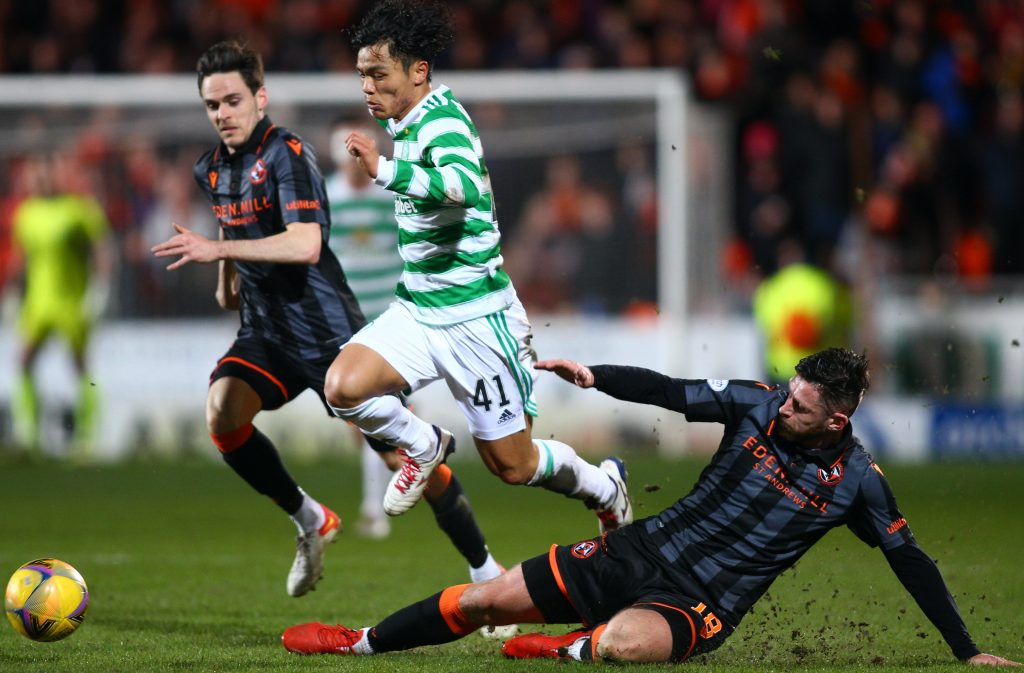 UP AND OVER…Reo Hatate evades a sliding tackle from United defender Callum Butcher.

OVER AND OUT…Giorgos Giakoumakis is congratulated by Matt O’Riley and Daizen Maeda after snapping up the second goal following a fumble from grounded keeper Benjamin Siegrist.

The game was virtually all over as a contest, though, when the Hoops netted a seond goal in the 58th minute after Carl Starfelt, who was steady throughout, released Maeda on the left with a superb long pass.

The winger took off at full speed before delivering a cross towards the near post. Siegrist, normally so reliable, took his eye off the ball for an instant, lost his grip and that was all Giakoumakis needed as he sprinted in to touch his effort into the gaping net.

It wasn’t a classic, but once again it caught out United as they tried to build momentum.

In the 75th minute, Postecoglou made a triple substitution when he sent on James McCarthy, Karamoko Dembele and Mikey Johnston for O’Riley, Forrest and Maeda.

Three minutes from time McGregor was removed to be replaced by Yosuke Ideguchi as the Hoops played out time.

Moments later, Giakoumakis netted an opportunist third goal when he touched on a deflection from a Dembele shot.

This was a potential banana skin in the drive towards the clean sweep, but Celtic hardly put a foot wrong.