THE Dutch FA have called a halt to the Eredivisie season – with no title winners and no relegation.

Ajax and AZ Alkmaar were locked level on points at the top of the league with the Amsterdam club ahead on goal difference.

However, Holland’s football bosses have decided not to declare champions following the lockdown due to the coronavirus pandemic.

The outcome means second-tier leaders Cambuur – 11 points clear at the summit – will be denied entry into the top flight.

It also awards a reprieve for ADO Den Haag and RKC Waalwijk who will avoid the drop, despite being anchored at the foot of the table.

The decision follows UEFA’s admission on Thursday that leagues could be called in “special cases”, although their preference remained that every top division is played to a conclusion.

KNVB, the Dutch football authority, held a ballot among clubs over how the season should be ended after the nation’s government declared no public gatherings until at least September 1.

Top-flight outfits were asked to vote on whether promotion and relegation should take place.

Remarkably, nine teams – HALF of the division – abstained and told the KNVB to make a decisive ruling. 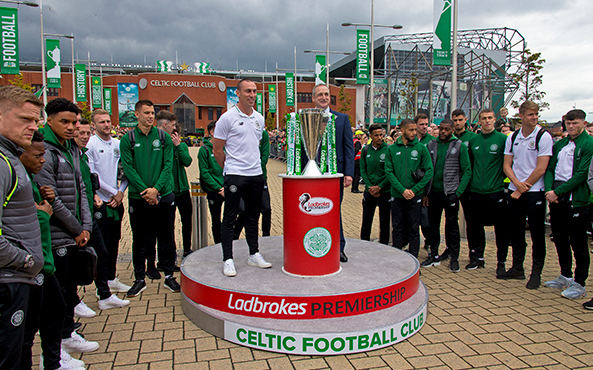 THE CELTIC WAIT…Scott Brown, Paul McStay and Celtic with the title last season. Now the Hoops await the collection of this year’s crown.

The nation’s chiefs declared the campaign at a close yesterday, deciding against an expanded 20-team league.

Although the title will be left vacant, Ajax, who won the crown last season, have been granted direct entry to next season’s Champions League group stage.

AZ will begin at the qualifying play-off round while Feyenoord will join PSV Eindhoven in the Europa League.

The Belgian FA are likely to follow the example of their neighbours and confirm their early proposal that Club Brugge, 15 points ahead in their Jupiter league, win the title.

Celtic, of course, were leading by 13 points with only eight games to play before football went into cold storage.

It is inevitable the Hoops will be awarded their ninth successive flag once the SPFL take care of outstanding business. The Hampden chiefs have called a meeting for Monday, but it is unlikely there will be a call on the title.

Scotland’s title kings have insisted they want to win yet another championship on the pitch, but in these unprecedented times, they will have to be satisfied with being handed the title following another season of domestic domination.