CELTIC legend Davie Hay reckons the Hoops have got a bargain in £9million man Odsonne Edouard.

The former manager and player watched the Frenchman net two excellent goals in the 3-1 triumph over Rosenborg in the Champions League qualifier at Parkhead on Wednesday.

And Edouard’s all-round performance made  a massive impression on Hay, who is now a club ambassador.

He said: “I never thought I would be saying this, but I think Odsonne Edouard is going to turn out to be an even better prospect than Moussa Dembele.

“I am a massive fan of Dembele and have been ever since he arrived at Celtic. He is already a star and will go on to achieve great things in the game, I’m sure. 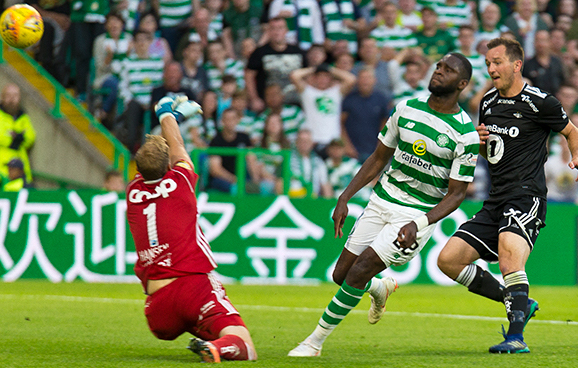 I’LL DINK TO THAT…Odsonne Edouard chips the ball in fore the third goal against Rosenborg.

“The greatest thing for a striker to be able to do, of course, is score goals, but he has other attributes that make him such an asset.

“He can be direct, he can hold it up, his link-up play is good, he just seems to have all the strings to his bow that any top forward needs.”

Hay added: “A lot of people have questioned Celtic’s transfer activity – or lack of it – this summer, but don’t forget that they broke their transfer record in signing Edouard.

“When you take the fee into account then that shows just what they think of him. And, in my view, it was entirely justified.

“A massive transfer fee like that, at least in Scottish terms, could put huge pressure onto the shoulders of any young player, but if anything, it seems to have boosted his confidence.

“!t was a huge vote of confidence in Edouard that Brendan Rodgers was willing to alter a shape that has proven so successful in order to accommodate both him and Dembele in the starting line-up.”